The widespread of Android continues into the laptop segment as another manufacturer, Lenovo, has designed a notebook to run solely on Google’s mobile platform. Called the A10, this system falls in the convertible category and it is being touted as an affordable and ultra-portable companion.

The A10 laptop falls in the same segment as the Ativ Q from Samsung, the SlateBook x2 from HP and the Transformer Book T100 by Asus, albeit it isn’t as powerful as its competition. Lenovo highlights that the device is powered by a RK3188 chipset that has a quad core Cortex A9 running at 1.6GHz and Mali-400 MP graphics. The notebook features a dual mode convertible design which is made possible by a rotating screen. 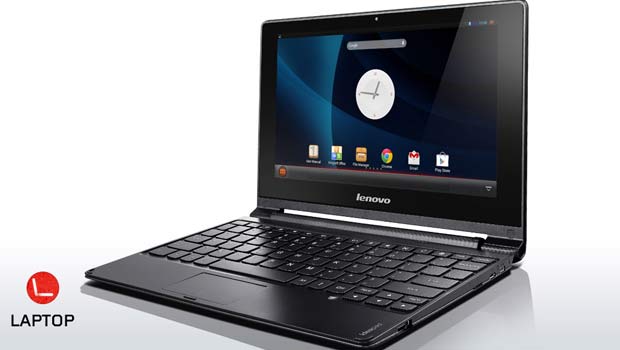 Under the lid, the company has fitted a 10.1-inch 1366 x 768p screen with 10-point touch input. The display can be turned by up to 300 degrees and a stable hinge has been placed to keep it steady in stand mode. There’s an integrated 0.3MP webcam as well. In laptop mode, you’ll be presented with a full-size AccuType keyboard and a multi-touch trackpad.

The notebook operates on Android 4.2 Jelly Bean and comes with access to Google Play services. The device also houses Wi-Fi and Bluetooth modules as well as 2 USB 2.0 ports, a microUSB slot, a microSD card bay and optional microHDMI output. The A10 weighs under 1kg and it’s 17.3mm at its thickest. You can expect up to 9 hours of video playback on a single charge.

Lenovo hasn’t provided any price or availability details as yet for the A10 laptop and it notes that the information will vary by location.