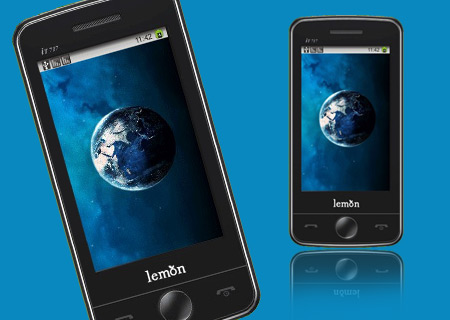 The picture of Lemon Mobiles promoting their iQ 707 and iT 717 phones back in May this year is fresh in our minds. The company hit the ‘Need for Speed’ theme pretty right with the checkered racing flags. The company’s iT 717 got us busy with its antics last week and we thought Dale Carnegie’s popular quote ‘If life gives you lemons, make lemonade’ may befit this new product. Except that squeezing out a review instead of lemonade was what we decided to do with this ‘Lemon’ offered to us. ‘Not another iPod look-alike for a phone!’ we found ourselves exclaiming as we saw the picture of the Lemon Mobiles iT 717 on the carton we received. The Touch ‘N’ Play tagline though that was inscribed neatly on the big black box parking itself on our desks diverted attention almost instantly.

What popped out on ripping the package open was a phone nestled on a black cardboard much like a king seated on his throne. Beneath this were other assortments which included a set of earphones, the warranty card, user guide, pen tailored stylus, the charger and a phone case. The phone has a decent hue of black and silver paint; though it’s overtly glossy appearance takes away from what could have been a very nicely crafted device. You’d only be ignorant if you missed the very obvious reference to Apple’s iPod in design. In a full rounded demeanor with neat curves along the edges, the phone is fitted with a large 3” touchscreen and despite this it bears a very lightweight profile. Our innately tech instincts saw us dropping the bundled user guide as soon as we’d picked it up thanks to its befuddling comprehension of features.

Right below the screen is the main circular button for OK / spanning through the various homescreens. It is surrounded by the call answer and call reject buttons on either sides with the latter also functioning as the power on/off button. Just in between all of this is the word lemon inscribed in a silver grey shade. A speaker grille features right above the screen and the phone’s edges are bare except for the left one which is embedded with volume control keys and the lower edge holding the headphone/USB port. The complete jet piano black finishing on the back of the phone looks like it’s been planted a wet one by the white and green lemon logo. The top area of the rear side holds a 3.2MP camera lens next to which is a more defined speaker mesh. We loved the accompanying soft velvety black case which gave the handset a snug fit barring the fact that it was a magnet for dust and dirt. Getting two SIM cards into their distinct slots was effortless, though the act had us doubting the back flap’s durability.

As we dived into the Lemon Mobiles iT 717, the ‘Slide to Unlock’ on its homescreen reminded us of you know who, the iPhone of course. The phone lit up and seemed to be quite a bright chap literally with its very vibrant resistive screen. We could customize up to 3 homescreens with a maximum of 9 widgets. The left margin of the screen held a list of shortcuts that could be dragged and dropped onto the desired homescreens. The bottom most area of the display had the menu, call dial, contacts, messaging and settings function. The menu is arranged in a 3 x 4 matrix and hovering your finger or the stylus on an icon, gets it to standout like a bubble alluring you to hit on it. The features wrapped on to this phone are very conventional and there’s nothing that’s out of the box as such with your regular File Manager, Call center, Messages, Multimedia attributes among others. But the fact that you get all of them at the price this phone is offered makes it a forerunner in the value-for-money bracket. 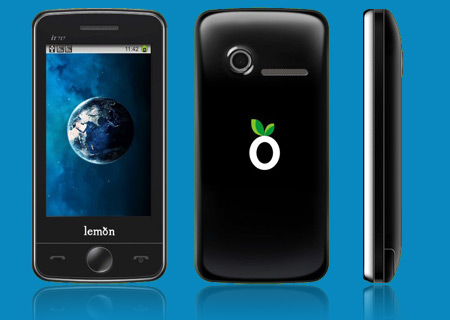 We started off by sending messages through the virtual QWERTY keypad and while it isn’t the best of the breed, it’s decent nevertheless. Having full support for special characters, if you must you can also send messages in Hindi. Despite all the settings we went through, getting the browser up and running was quite annoying and we lost connection quite often. The things you can do when browsing the web are very basic and the phone lacks proper navigation even with the stylus. When we tried accessing our Gmail account in what seemed like eternity, the browser showed an unsupported scripts error. The installed version of Opera Mini was no better in terms of performance. For games, the company puts in a Puzzle and Magic Sushi. While the former requires you to complete Lemon Mobiles logo from the jigsaw pieces, the latter was borrowed from Bejeweled with the only difference being food in the place of jewels.

Neither the audio nor the display of the games are worthy of any mention. With a committed Facebook, Twitter, MSN and Nimbuzz application for company, the handset is though quite complete on the connectivity front. The Organizer features a World Clock among the regular Calendar, Tasks, Alarm, Notes and more. The Extras section includes a Health function that keeps a tab on BMI along with an Ebook reader and Answering machine feature, all of which are very thoughtful inclusions. The Multimedia section of the phone holds attention with the 3.2MP snapper minus autofocus and flash. You can however capture images in a maximum size of 2048 x 1536. Being able to tweak the white balance, a number of scene modes and effects are also included for the amateur photographer’s pleasure. The quality of both still images and videos is just about passable. What’s good though is that all these options and more are up on the screen within reach when you enter the camera mode. Also you can personalize captured content through the Photo Editor which packs in the option of adding a frame, text, icon and others.

Audiophiles should find solace in FM radio complete with the ability to record what’s playing on FM and a Melody composer. The bundled earphones too, do a fair job for on-the-go audio. Unlike the manual which says you’d be warned when the battery on the phone drains out, it was much the opposite. Besides obviously going off on its own without any hint, the phone just wouldn’t switch on even after it had received 30 minutes of power. It took a refresh of the battery from its compartment to get the phone running again. The Lemon Mobiles iT 717 handset satiated us with a one day battery life on medium usage.

It’s a full touchscreen with dual SIM capabilities and that surely puts it a notch above its counterparts at the price point that it is offered.

The screen is by far the high spot of the phone. As bright as Lemon could get, it’s vibrant to the hilt.

The unresponsiveness of the touchscreen makes it as much of a downer as it is an upside.

The build appears to be on the cheaper side with the back flap actually very frail when we had it off.

There’s no dedicated space on the phone to hold the stylus and the chassis could have also included a 3.5mm port.

With impressive externals, the iT 717 phone could have done with better innards too. While the display is surely the talking point on the phone, it would have helped by being a wee bit more responsive. It’s a rat race in the touchscreen market and the huge competition has pushed back the average price of a fully functional phone. There’s no denying that this phone does break the price point of a complete touchscreen phone but how well the poor quality of its very vital organ would go down with most mobile enthusiasts is worth pondering about. You may consider picking up this Lemon Mobiles offering if you’re looking for a basic phone with full touch capabilities. We mark the handset at a good 7.5 out of 10.