While we patiently wait for a new Sony flagship smartphone, it looks like there will be more mid-range releases coming soon as well. The Xperia Cosmos is the latest handset from the Japanese conglomerate to reach the rumor mill and details suggest that it will cater to the selfie trend which is pushing OEMs to do more in the camera department.

This means that the leaked smartphone could very well be the successor to the Xperia C3 which was launched last year. As you can see in the image below, posted online by @upleaks, the name Sony Xperia Cosmos is clearly visible in the UI. Of course, this will not likely be the final branding and is merely a development codename for the handset. 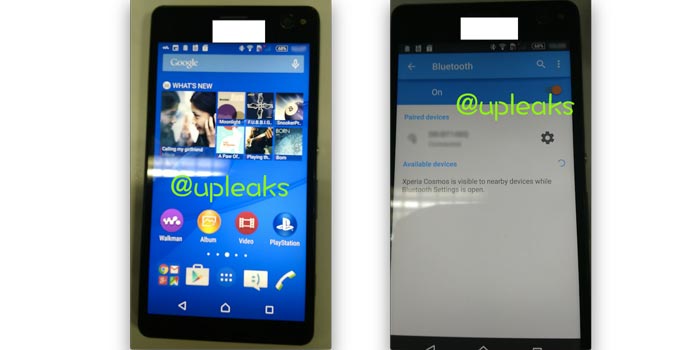 The handset is said to have a high-resolution front-facing camera of unknown resolution and an LED flash. The Xperia C3 arrived with a 5MP sensor and we could see the company thrown in an 8MP or 13MP shooter with upcoming device. As for the rear snapper, we wouldn’t expect anything higher than 13MP. The leakster goes on to say that the device will go official under the model number E5306.

Also read: Asus is working on a selfie Zenfone smartphone for Q3

Apart from these details we know that the Xperia Cosmos comes with Android 5.0 Lollipop out of the box. And it will gain steam from a MediaTek MT6752 processor which is a 64-bit LTE enabled octa core chipset with Mali-T760 graphics.

Here’s what the Sony Xperia C3 has to offer in specs:

Seeing as the previous selfie smartphone went official in July of 2014, the Sony Xperia Cosmos could arrive around the same time.