Motorola’s new flagship smartphone dubbed the Moto X+1 has been leaked once again in the form of press images that are of its Verizon-branded model. These pictures are coming from none other than Evan ‘Evleaks’ Blass who has touted them to be a ‘retirement gift,’ as he had bid adieu to the leaking business recently.

This is the clearest look at the Moto X+1 handset that we’ve got until now. The leak confirms that just like its predecessor, this handset too will be available in white and black versions, with customizations available for its back panels and many other areas. The arrangement of front-facing speakers is a design change that was adopted by the Moto E, and it has now crept onto this phone as well. 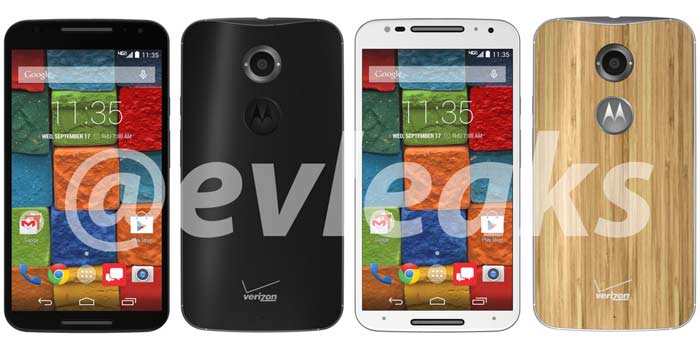 That ring around the camera on its rear surface is actually a flash, but there’s no word on why the Motorola logo is so awkwardly large and weird-looking. Our guess is that it’s a button of sorts, meant for controlling one of the device’s unique software features.

Specs of the Moto X+1 smartphone which have leaked prior to this:

In case you’re wondering what that red colored icon on the homescreen of the Moto X+1 handset is, it’s actually that of Verizon Messages, an IM service which the carrier pushes into most of its handsets. This phone is scheduled for a September 4 unveiling, along with the Moto G successor, the Moto 360 smartwatch and some kind of a Motorola headset.