It was believed that the previously leaked LG V510 was in fact a refreshed version of the large Nexus 10 tablet, but new developments have indicated otherwise. A leaked service manual of the V510 has set tongues wagging since it has revealed that an 8.3-inch display sits atop this device.

The recently launched LG G Pad too bears an 8.3-inch screen, and what’s interesting is that all the other major specs of the device (model number V500) too stay consistent with those of the V510. It is hence believed that this could be LG’s next Google-commissioned product, a pure Android Nexus 8 tablet, about which nothing had been said or heard in the past. 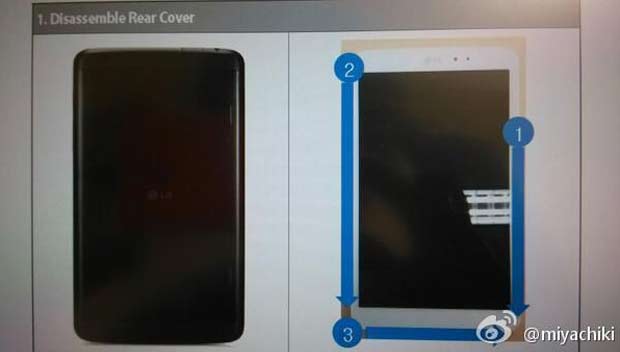 However, there’s a slight contradiction here as well. The service manual in question, which by the way was revealed through by a Chinese Weibo user named @miyachiki and was spotted by Juggly.cn, contains pictures of the V510, albeit without any Nexus branding. This points towards the possibility that it might just be another version of the LG G Pad after all.

Showcased for the first time in September this year, the G Pad proffers a resolution of 1920 x 1200 pixels on its 8.3-inch screen. It features a 5MP AF rear snapper and a 1.3MP front one. A 1.7GHz quad core processor powers it from within, taking assistance from 2GB worth of RAM. A 4,600mAh Li-Ion battery is also included in its offerings.

And like we said, these specifications even apply to the LG V510, which has led to all the confusion. We hope the mystery about whether it’s a Nexus 8 tablet or just another G Pad version gets solved soon.