In the past few days, we’ve heard the words LG and Lollipop in the same sentences far too many times, what with all those leaks about G3’s new software build being ready for deployment and the company’s confirmation on the same later on. And now we have one more such news to bring to you; about a leaked H440n smartphone which has the newest version of Google’s OS onboard.

Information about this upcoming LG phone has come via the HTML5Test website, as revealed by My LG Phones. The company hasn’t yet disclosed any smartphone which has its model number starting with ‘H.’ This means that a fresh series is on its way. 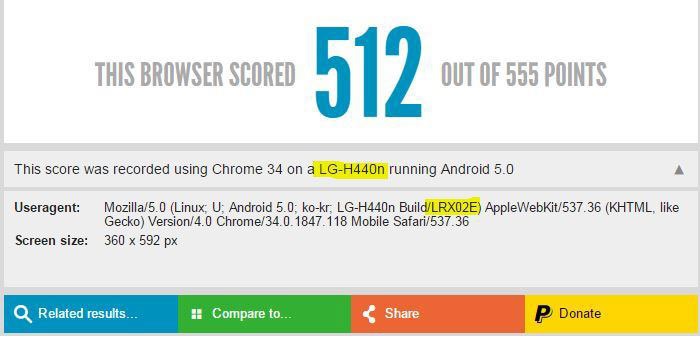 The source has learnt that the phone is the beneficiary of a 720p HD display of an unknown size, and that it’s slated for an early 2015 launch. That resolution sure does confirm that it’s not the new LG flagship, but it still leaves the debate open for whether it’ll be a mid-range handset or an entry-level one.

Apparently, the LG H440n is the European version of the upcoming phone, and it has two other variants as well. The H441 model will supposedly be offered by T-Mobile, whereas the LG-H443 will be made available via AT&T. No versions for Verizon Wireless or Sprint have been spotted yet.

Android 5.0 Lollipop has been overhauled by LG with its Optimus UI additions extremely fast this time around. In fact, it has confirmed that the G3 flagship will be receiving the update this week itself, while Google is still to confirm when the stock version of it will be rolled out to Nexus, Google Play and Android One devices.

We’ll have more on the LG H440n smartphone when additional details about it are at hand.