The upcoming Samsung Galaxy Note 5 has been leaking like crazy, and today’s development is just another one among its long string of leaks. Someone has gone hands-on with the device and has posted images of it clicked from different angles, thus going onto confirm a number of details that were so far existing as speculations.

Firstly, it can be said now that the Samsung Galaxy Note 5 will not come with a USB Type-C port. As shown in the one of the images below, the standard micro USB port is the way to go for it.

As you can see, the phone has directly taken its design inspiration from the Galaxy S6 range. What this effectively means is that there’s no scope for a removable battery and a microSD card slot. Fans who were disappointed over these two features not being present on the S6 handsets can forget all hopes of seeing them on the new Note 5 phablet as well.

These pictures have come our way courtesy Droid Life, which claims to have received them through its sources. One of these images also shows the Air Command menu which is supposed to pop up when you pull out the S Pen stylus from its slot. Interestingly, an Instagram option is present in it, alluding to the possibility that TouchWiz will let you customize this menu for the first time.

Here’s a quick glance at the leaked specs of the Samsung Galaxy Note 5: 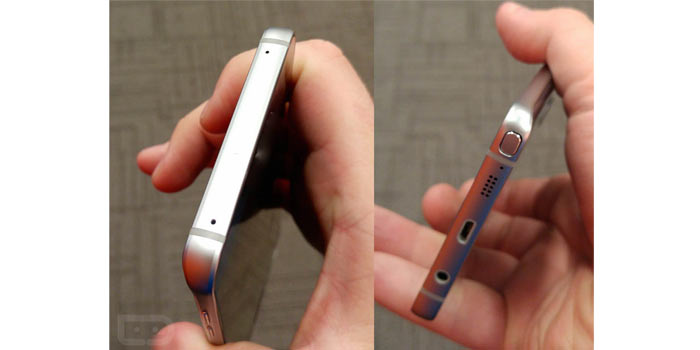 August 13 is when everything will be clear, as that’s the date on which the Samsung Galaxy Note 5 is most likely to be unveiled alongside the S6 Edge Plus.