Layout is an Instagram cousin that lets you make collages

Time to uninstall all the third-party collage-making apps on your smartphones, even as Instagram has introduced its very own such utility that goes by the name of Layout. Available only for iOS devices right now, it’s expected to be doled out for Android in the coming months, but we’re a bit skeptical about that given Hyperlapse‘s fate.

Various different apps like Pic Collage, Diptic, Moldiv and Stitch are on their way to becoming redundant for some Instagram users, even as Layout offers their beloved features in an official manner. At a time, you can select up to nine photographs to make a collage of. 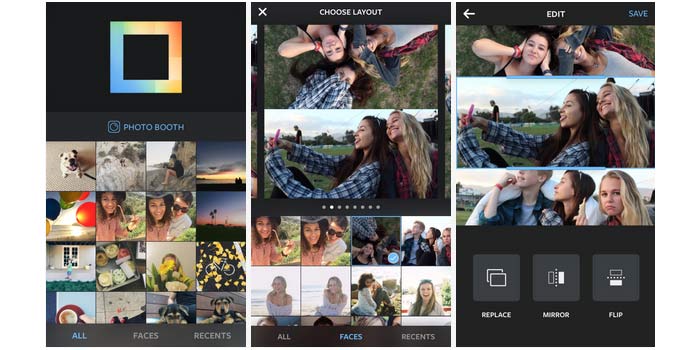 The interface of the Layout app provides you with three different sections you can select your pictures from. These include recent photos, images with people’s faces in them and all your shots. Moreover, there’s even a ‘Photo Booth’ functionality which makes use of the device’s front-facing camera to capture four shots in quick succession.

During the editing part, Layout puts forth a total of ten different collage templates which it creates using its algorithms. The format of these templates depends of course on the number of pictures you have chosen. And then there’s the facility to fine-tune your collages as well with functions like dragging and dropping, pinch-to-zoom, mirror effects and more.

With the sharing option you can either publish the collages directly to Facebook, Snapchat, Flipboard and more, or take them into Instagram for adding filters and publishing them in its database. Just so you know, the latter app has just crossed the 500 million mark in terms of Android downloads.

Like we said, the new Layout app from Instagram is live now for iOS devices through the Apple App Store.