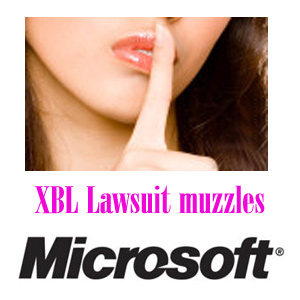 Microsoft has had to keep mum about the corrections it is making to Xbox Live, thanks to a lawsuit filed against them.

Since the Xbox 360-maker has a class action suit filed against it, it cannot come out with any information about the status of repairs to its Xbox Live servers. This came to light when Major Nelson AKA Larry Hryb revealed via his Sunday podcast that a Texas-based lawsuit was stopping him from offering updates on the status of the service.

Gibson Law Firm dragged Microsoft to court accusing it of violating the contract, breach of warranty and careless misrepresentation for not forewarning customers more properly about how their service could suffer outages if they had a massive swell in users. This scenario has existed since the holiday season of 2007.

The Redmond-based company saw a record amount of subscribers joining its service and also experienced a few service interpretations. Though the outages have been very obvious to several Xbox Live users, not all of them have occurred in one large location at one time.

To recompense for the entire issue, Microsoft has even announced that in the near future it will be giving every Xbox Live subscriber a free Xbox Live Arcade game. Details on this will be out soon.