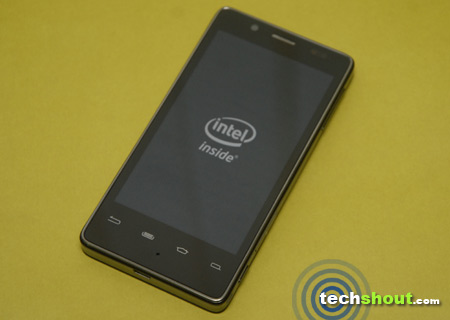 The Lava Xolo X900 is the first Android-powered smartphone to arrive with an Intel-based processor, stealing the shine from the Lenovo K800. Intel isn’t entirely new to building mobile processors. The company along with Marvell, had already developed 3 generations of XScale SOCs based on 32-bit ARMv5TE processors which were utilized in PDAs and other handheld gadgets. And although Intel has dropped out from the business since 2006, they’re now back for round 2 and this time with their own SOCs dubbed Medfield, in direct competition with ARM. So can Intel gain a dominating position in the smartphone industry as well? We’re looking forward to a few answers by the end of this review.

The Lava Xolo X900 might be the first Intel-based Android handset, but it’s not the only one. The Lenovo LePhone K800 and Orange San Diego also house the very same Atom Z2460 SOC codename Medfield. When the company first announced the project back in May 2011, the Atom SOC was initially aimed towards sub-9mm tablets running on different platforms such as Android, Windows and MeeGo. So that’s one OS down for Intel. Clocked at 1.6GHz, the processor is crafted using the 32nm high-k metal gate process technology. And just like modern ARM processors, this one’s designed to be energy efficient as well. The graphics module here is the PowerVR SGX540 which hides in the Galaxy Nexus as well, clocked at 400MHz. 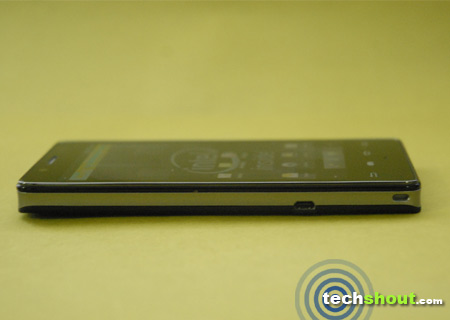 A noteworthy fact about the 3 aforementioned smartphones is that they each have 16GB of built-in storage with no sign of an expandable slot. Could this be a Medfield-related problem or just a coincidence? Well, we hope Intel will soon clarify that for us. And while we’re on the topic of memory, there’s 1GB of RAM allotted for smooth multitasking. On the front, you’ll find a 4-inch TFT LCD capacitive touchscreen proffering a 1024 x 600 resolution. Where connectivity is concerned, the handset sports Wi-Fi, NFC and Bluetooth 2.1, while the Android Gingerbread platform that’s upgradable to ICS, presents itself as a convenient way to get online. Snap-happy or not, the phone comes bundled with an 8MP primary camera on the rear and a 1.3MP one sitting pretty on the front. 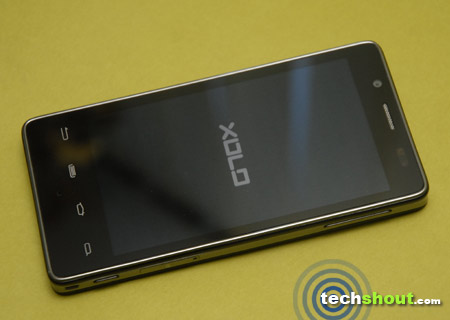 So here we are gazing at the Lava Xolo X900 and for some reason, it reminds us of the iPhone here and there. We’re not saying that Lava has ripped off Cupertino’s smartphone design, but the thick silver bezel running along the sides and the similar placement of components on the top, not to mention the micro-SIM tray that needs an ejection tool to open as well, gives out a hint of the iPhone’s design. All these aside, the device is simple, yet elegant in appearance. The handset is basically built around dimensions of 123mm x 63mm x 10.99mm and tips the scales at just about 124 grams. But it feels lighter than the 109-gram LG Optimus Black. The build quality isn’t exactly premium, but the overall appearance is good. The front is entirely covered by a protective layer of Corning Gorilla Glass to resist those pesky scratches and scrapes up to a certain extent. And apart from the 4 capacitive buttons, we ran into the awkwardly placed microphone that’s centered below the display. 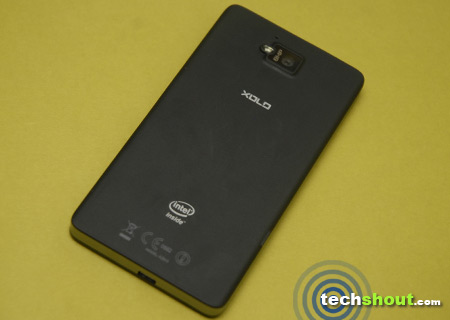 It gets better when you head to the flip-side. The rear panel is a bit flexible and takes on a rubberized finish that’s smooth as well as highly scratch- and smudge-friendly. But hold on, here comes the good part – a simple wipe or two over the marks make them disappear. Rubbing off scratches here is as easy as clearing off grease and sweat residue from the screen. Coming to the components employed, the top features a 3.5mm audio jack and a power button, while the rear houses nothing more than a micro-USB port. On the left, you’ll find the micro-HDMI port and loudspeaker, whereas the right is affixed with the micro-SIM tray, a dedicated camera button and a second loudspeaker. For a Lava-branded device, we must say, we’re pretty impressed with the X900. 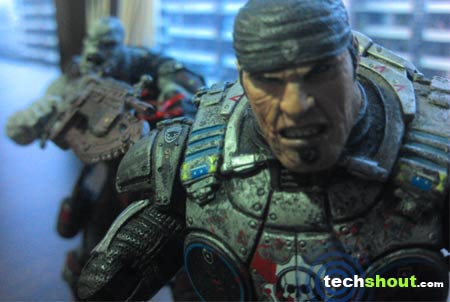 The Lava Xolo X900 is at the top of its game with Intel inside. For a single core smartphone, it performs well beyond our expectations. The performance is not precisely ‘blink, and it’s done,’ but from launching applications to running demanding tasks, the phone can handle it all smoothly. So just how different is the Intel-based X900 from other Android phones running on ARM processors? Based on benchmark results, the handset scores 5628 points in AnTuTu Benchmark, that’s 227 points more than the dual core LG Optimus 3D Max. The comparison chart provided by the application places our review unit above the Tegra 2-equipped Optimus 2X and lower than the Galaxy S2. Compared to the 3D Max, we noticed better fps in GTA III and other demanding games. On the downside, there’s a limited availability of compatible titles at the moment. But that number is most likely to grow soon. 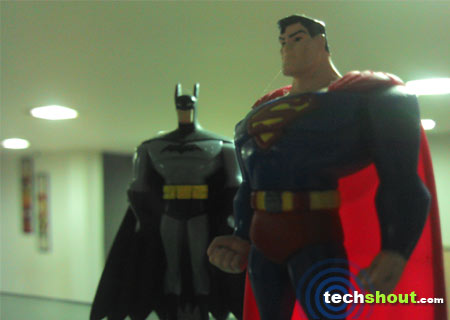 Coming to the camera, we managed to snap up quite a variety of images. Most pictures appear over-exposed and slightly blurred. However, the result isn’t the same for macro shots. The 2 sample images say it all. Moving on, 1080p video capture is smooth with no lags whatsoever. The only problem we had here is that the camera takes some time to focus on objects while recording. As you probably know, the Gingerbread OS runs the show with ICS in the works. Lava has no doubt done a fine job with the X900, but we expected a lot more on the implementation front. The UI is basic-Android sans any extras and the music player is simple and lacks a lot of features. Additionally, playback isn’t all that enjoyable. The included earphones aren’t to be blamed this time as the lack of custom EQ settings is the culprit here. You can expect approximately 7 hours of web browsing over Wi-Fi on a single charge.

Somehow, the sudden UI lags which crop up in most Android devices just didn’t show up in the X900. The minimalistic interface could answer for that.

The Lava Xolo has a highly responsive display which works flawlessly for touch-optimized games.

A single core processor that can stand at par with dual core ones; point well made, Intel.

For now, there is limited availability of applications and games on the Google Play store that support the Medfield SOC.

From the UI to extra features, everything has a basic feel and Lava could have done a lot more on the implementation front.

We’d prefer a hot-swap SIM slot or the usual slide-out one in place of the annoying SIM tray that needs to be ejected.

While there’s a lot to praise about the Lava Xolo X900, Lava still needs to do better in terms of features. So far, the Intel Medfield processor and the rest of the specs are worth the drool. But if Lava intends on giving the competition a run for its money, they really need to throw in some extra stuff, add a little icing on the cake. Moreover, it’s by far one of the best smartphones we’ve seen roll out from an Indian manufacturer. An 8.7 out of 10 rating is what the device truly deserves. Potential users in India can pick up this beast for Rs. 22,000.