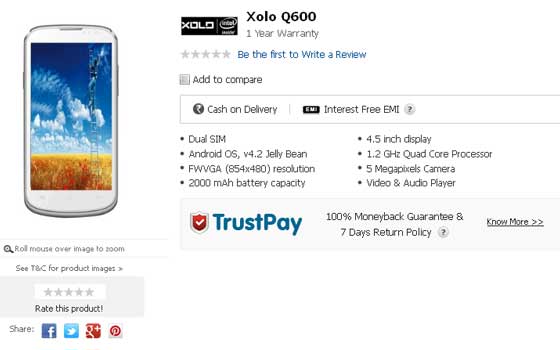 The Lava Xolo Q600 has just popped up in India sans an official launch and it has already been put on sale for a budget price. The Lava smartphone falls in the same category as the recently unveiled Micromax Canvas Lite and the Gionee Ctrl V4, considering just the price.

On a side note, Micromax is expected to launch a new flagship next week, with details of the phone (except the price) already having been leaked. The Lava Xolo Q600 is yet to surface on the company’s official website, so details are limited to what are available via Snapdeal. On the bright side, most important components have been listed out. Instead of a 5-inch touchscreen, the company has opted for something slightly smaller.

The Lava Xolo Q600 is fitted with a FWVGA 854 x 480p resolution panel on the front which spans 4.5 inches wide. Accompanying it is a VGA webcam for conducting video calls. The standard dual SIM support is provided with this handset as well, but there’s no mention if both slots support 3G HSPA or not. While there’s no information on how much the phone weighs, the dimensions read as 133.5mm x 67mm x 11.9mm.

On the rear, buyers will be greeted by a 5MP camera. What’s worth mentioning is that the Lava Xolo Q600 is a much more affordable option to the Q700 and Q800 smartphones from the same series. They share common specifications including a quad core AP based on the Cortex A7 architecture with 1.2GHz clock speed and SGX544 graphics. Storage needs are catered by 512MB of RAM, 4GB ROM and a microSD expansion slot with up to 32GB support. Lastly, there’s a 2000mAh battery powering it up with an estimated talktime of 10 hours or standby of 242 hours on 3G,

The Xolo Q600 is available for purchase on Snapdeal for Rs 8,749. It’s currently being offered in white and with EMI options of 6 and 3 months.