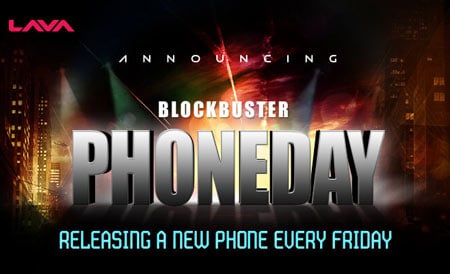 Lava has revealed that it will launch one new phone every week on a Friday, and as it so happens, for the third week of February, that’s today. But it has nothing to do with the famous Goldspot song, and the Indian manufacturer calls it Blockbuster Phoneday. The company isn’t averse to taking more unconventional routes, and has quite a few devices, both high-end and entry-level, to its name.

This scheme from Lava Mobiles to launch a phone every Friday comes as quite a surprise. Presently, it lets its products slip out quietly and under the radar via the many online retail outlets that deliver consumer electronics. What it plans to reveal today is still a mystery and should show up on its Facebook and Twitter pages before the long day is over, we think.

Over the past few days, the company has been marketing the new idea as aggressively as it can via readily available channels such as the above mentioned social networks. On Wednesday it asked fans and followers what Friday meant to them, while yesterday it posted an image announcing the new program. Late yesterday evening, another picture was uploaded with a tagline that suggests the device is coming to stores. Most recently it has updated its Facebook page with a post that asks people to try their hand at guessing its specs.

In the beginning of February, in a similar fit of social network postings, the company had asked us to look into the future, before revealing its E-Tab Xtron with Android 4.1.1, a 7-inch IPS panel, a 1.5GHz dual core ARM Cortex A9 chip and a quad core Mali-400 GPU. The tablet also has a power unit of 3,500mAh capacity and 8GB of internal storage, but only puts out visuals in a 1024 x 600 pixel resolution. 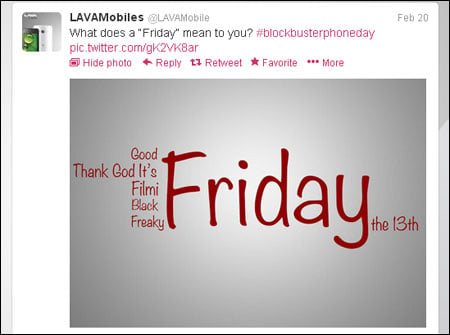 We saw another high-end handset recently, the Xolo Z1000, which brings along a 5-inch IPS display with a 720p resolution and Jelly Bean. Other noteworthy features include an 8MP primary camera, a 1GHz dual core processor and a 2,100mAh battery. It can also be used with two SIM cards, while it has a 1.2MP secondary camera and is 3G compatible for video calling.

The interesting thing is that two e-retailers in the country may have outed the upcoming device. Both Flipkart and Saholic have listed one Iris 502, which with Jelly Bean, a 5-inch capacitive touch screen, a 1GHz processor, a 5MP camera and a 2,000mAh battery, seems like a mid-level gadget. While the former hasn’t a price or picture, the latter has the 502 up for sale for Rs. 8,499 and this image to go along. 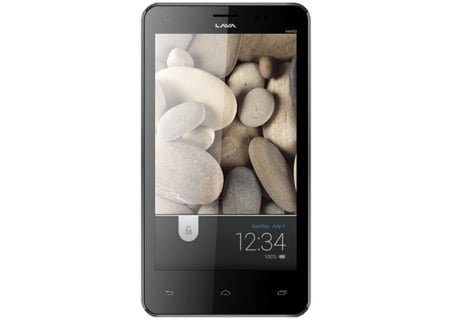 Could the Iris 502 be the handset awaiting a release, and will it get the ball rolling on Lava’s weekly Friday phone launch? Either way, we’ll probably only have to wait a few hours to find out for sure.

UPDATE: It’s the Iris 454 that has been let out this week.