Lava has announced a successor to its Connect series of tablets in the form of the E-Tab Ivory which is to be sold in India at a price of Rs 10,199. The interesting part about this voice calling slate is that it features two SIM card slots, with both supporting GSM connectivity. This 7-inch device doesn’t have a firm release date as yet, but it’s slated to go on sale within a few days from now. Its competitive price tag will pit it against a number of other similar low-cost tablets which are vying for consumer attention.

Like we said, the Lava E-Tab Ivory grabs hold of a 7-inch display that lies beneath its capacitive touchscreen. This panel showcases its visuals with a resolution of 1024 x 600 pixels. Powering the tablet from within is a 1.2GHz dual core MediaTek processor which gains company from a Power VRSGX531 Ultra GPU and 1GB worth of RAM. Android 4.1 Jelly Bean is the preferred OS which is a bit of a letdown, considering such tablets are not usually blessed with further software updates. 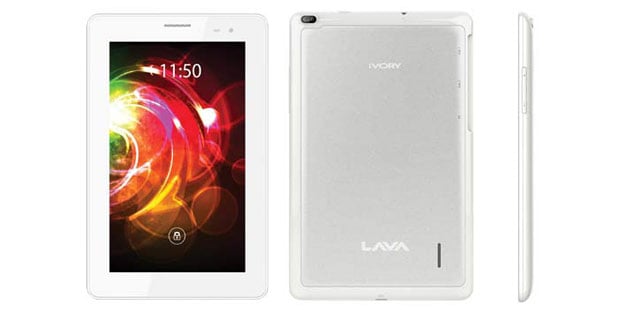 Inside the Lava E-Tab Ivory, you’ll find 4GB worth of storage space, and its microSD card slot will enable you to expand it further up to 32GB. Lava has built the slab into a 194mm x 120.5mm x 10.8mm body, and has granted it a 3000mAh battery pack as well. A 5MP rear camera and a 0.3MP webcam are some of its other significant offerings.

The Lava E-Tab Ivory is all set to hit markets in India within the coming weeks, with its price placed at Rs 10,199.