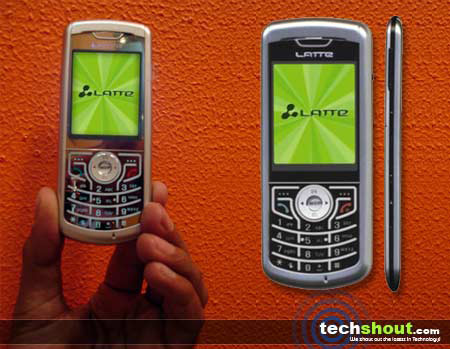 The Slim 11B from Latte is a GSM camera phone. When you look at it, it reminds you of a Motorola, but it is not an exact copy of it. It has several features that make it a cool phone to buy.

When I first used the Slim 11B, besides the interface, what caught my notice was the voice that said out the numbers as you type them in. Even though it is a camera phone, my first instinct was to call up someone. So as soon as I began punching in the numbers, I heard, to my surprise, a sweet voice going, 9 8 9… I was amazed and not only that, it also speaks out the menu functions when you scroll it.

The camera in the Latte mobile phone is a 1.3MP one which allows you to take pictures of decent quality. By decent quality we mean, that you can capture pictures that are 1280×1024 in size. And Latte has been kind enough to add a lot of options for the images. So it means that you have 17 different ‘Effect Settings’ to choose from when you are taking pictures. There is Grayscale, Sepia and even Sepia Green and Blue, which will enable you to give a great and nostalgic look to the pictures you click.

Along with the Effect Sitting feature, you also have the option of White Balance, Shutter Sound and a Night Mode. Believe me, the Night Mode is one important feature and it is really is useful in a camera phone. There is also the delay timer, Image viewer, editor and a Banding mode that allows you to select the sampling bandwidth of the camera sensor. The phone can also record video in the MPEG format. Just like the digital camera function, the camcorder option has a lot of options that you can play around with.

However, what impressed me more than the camera was the sound quality of the speakers. The Slim 11B has awesome speakers and we were astonished that a mobile phone could sound so clear. The phone also plays music. You can play MP3, MIDI and wave files using a headset and you can also play it on through the handsfree. The interface of the music player is super and the phone has dedicated keys for music as well as video playback. You can play MP4 files too and the quality, if not great, was good, to say the least. A sound recorder function also features on the mobile phone.

And speaking of dedicated keys, along with the dedicated keys for playing multimedia, as we mentioned above, there are also keys for the camera as well as controlling the volume. You can also directly access the messages as well as WAP.

Besides the multimedia functions, there are the other usual functions like Call History, Phone book, File Manager and games. You can view up to 10 received call and 10 missed calls. In addition, the Latte Slim 11B also has a GPRS message counter where you can view how many messages have been sent and received. A call cost option has also been included, but normally here in India most cell phone operators do not use it.

Like other phones, the Slim 11B from Latte too has a phone book where you can store names and numbers on the SIM cards as well as on the phone memory. However, SIM card and the phone memory are treated as a single entity rather than a separate one. There is a quick search option that makes the phone book easy to use. The phone also has a melody composer as well as space to save downloadable ring tones.

The file organizer is also easy to use and you can see how much space is used. The phone comes with 60MB of internal memory. Then there are the other miscellaneous functions like the calendar, world clock, currency converter, unit converter and calculator. However, the one function which caught my eye in the Slim 11B mobile phone was the Health function that allows you to calculate the body mass index. It is really helpful for people who are health conscious. Latte has also put a stopwatch and a timer in the Slim 11B, thus making it a very useful device.

Now coming the negatives, there are no negatives as such, but they could have included more memory space and the camera should have been a 2 MP, if not 3 MP. The phone setup is available only in three languages, English, Portuguese and Spanish. We felt there should have been at least five more language options. The phone looks a little delicate too.

Our Shout: We think Slim 11B from Latte is a decent cell phone and is a good buy. We would recommend it if you are looking out for a good and sleek camera mobile phone. We give it 8 /10.