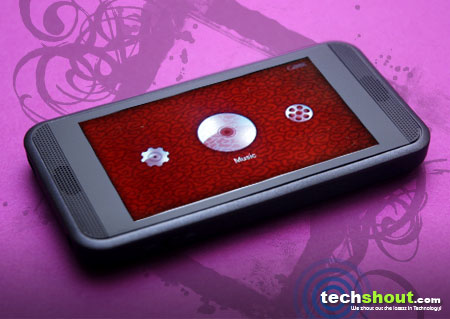 MP3 players are certainly evolving with time. Capable of doing more than just playing music, every new MP3 player takes the music fanatic in us to new levels. Marking its presence in this multi-functional MP3 terrain is the Latte iVu 4GB MP3 player. Yes, the PMP is the most recent device to have reached our desks for a review.

The recently launched player certainly excites us audiophiles with its wide array of functionalities. We were all the more excited because it comes from a brand that is known to belt out economical products. Well, we just couldn’t wait to get the player under the scanner. So here’s our experience of the Latte iVu.

Other key features of the player include a 2.0 megapixel camera, FM radio, a voice recorder, eBook reader, stopwatch and calendar. Besides, the player is also bundled with an integrated FM transmitter that enabled us to effortlessly groove to the beat via the car’s stereo. Delivering support for MP3, WMA, OGG, FLAC, ACC and APE audio formats, the player also supports AVI, RM, RMVB, FLV video output up to 30 fps. Based on the high-speed USB 2.0 interface, the iVu MP3 player is accessorized by headphones, a USB cable, a car DC adaptor, software and the manual guide.

Speaking individually of the player’s attributes, let’s start off with the looks and design of the player. The aesthetics of the player are rather simple. The buttons embedded on the player offer basic and easy browsing through the simple interface. It’s a hassle-free device that comes without most of the frills found in modern day players. With an ordinary display, the player is not an instant eye-catcher. On second thoughts, the player actually holds no exceptional attributes in terms of physical appearance. 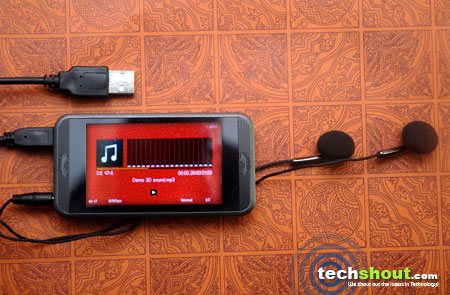 Audio quality offered by the player is of an exceptional degree. The player gets complete thumbs up for playback of music files. The Music segment of the player displays a current playlist and like any other PMP also separates music files on the basis of Artists, Album, Genre and Favorites. The Video section in the player is a compilation of all the videos in the player which may have been recorded through the camera or simply video files stored from other devices.

The camera has a 2 megapixel image capturing resolution and comes in two modes namely DC and DV. As the name suggests, the DC mode allows snapping of plain images while the DV mode enables video recording. Attributes for image capture and video recording include pixels which can be varied in the range of 320 x 240, 640 x 480, 1280 x 960 and 1620 x 1200. The camera mode also offers backlight options like low, normal and high, a zoom option, effects like normal, solar2, mono, sepia, negative and solar1. High, normal and low saturation options are also offered with the standard Auto and Night BWs for image/video capture.

There’s also a radio onboard. It comes with a multitude features and settings like manual and auto for search, a preset mode, save channel, delete channel, stereo switch, choice of receiving area and record FM. Yes, the player actually allows you to record songs playing in FM radio. On optimal settings of recording volume and frequency, you can acquire songs you have been longing for.

The player sports a Photo section which simply offers a complete view of all the images throughout various folders. 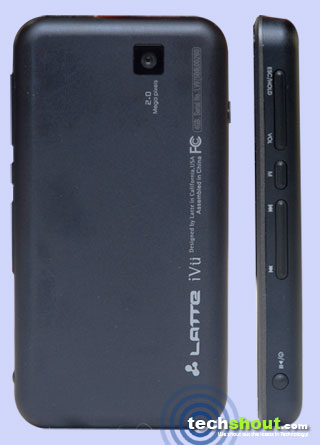 The iVu bundles in a user-friendly eBook reader too. Features of the reader include page jump, SaveMark, loadMark and DelMark. While you can easily adjust the font to small, large and mid for easy readability with the Set Font Size function, you can also adjust the text color to white, green or black with Set Color. The reader packs in an auto and manual browser mode. You can also have the flip time for a page set to 10, 15, 20, 25 and 30 seconds as per your convenience.

The next most enthralling feature of the iVu is its sound reproduction even with the standard headphones it is equipped with. The player amazed us with is detailed sound reproduction. You can actually differentiate clearly between the bass and treble while also being able separate out the instruments playing in the background.

The player is a simple plug-and-play device and does not require any software installations.

The ability to play around with individual frequency ranges thanks to the graphical equalizer function is actually a standout. Besides, the iVu has a really good radio reception.

Quite unlike most players, the iVu boasts of a built-in transmitter consequently eliminating the need of a separate accessory for playing songs while in the car.

The screen is bright and large with useful icons which provide simple navigation. The device also offers a hassle-free interface for searching songs. To navigate through songs all you need to do is go to the directory tree which is a simple structure.

We were also surprised with the kind of image quality the player offers. Photos actually look quite good and images captured through the camera are also pretty neat.

The radio recording function too is really exciting. With the right frequency adjustments you can enjoy CD-like songs recorded through the FM.

Sporting a solid body, the player is great companion while traveling or outdoors. It’s a tough device and also has firm buttons.

The battery life of the player is also pretty powerful. Lasting up to 15 hours on standard use, we could use the player continuously for around 5-6 hours without any low battery signals.

The iVu may not catch the fantasy of next generation users who prefer devices that are more stylish looking. A rather plainly fabricated device, we think the player needs a major makeover as far as looks are concerned. With the kind of futuristic devices being belted out these days, the PMP disappointed us.

Another downside of the player is its screen. Again, it’s a very ordinary one and could have been much better.

The player could also be difficult to use initially as all controls are located as buttons on the top panel of the player. With the kind of controls modern-day devices offer, the player’s controls need some getting used-to. Also, the controls are kind of difficult to operate as they need to be pushed a little too hard.

Though the built-in transmitter is a nice inclusion, it is difficult to get around the settings. Also, the transmission power is standard and could affect the headphones as it works by adjusting the volume. Besides, sound quality may also be affected depending on the car’s radio performance.

Finally we think the player should have included Bluetooth connectivity. The wide functionalities of the player could have been enhanced with the option to share files wirelessly.

The iVu player certainly had has rocking to the beat with its amazing sound quality. Its wide music playback options should attract music enthusiasts. Besides, the player is also pretty affordable considering it’s a complete music player. We think the iVu MP3 player is full value-for money. Rating it at around 8 out of 10, the player definitely gets a nod from us.