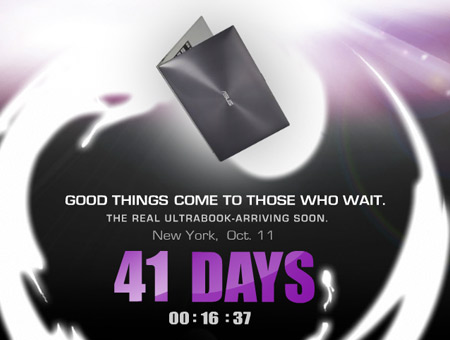 The Asus Ultrabook UX series is apparently ready to land on October 11, according to the Asus UX page. For those who don’t know what the hubbub is all about, we’re talking about extremely slim portable PCs powered by the next generation Intel Ivy Bridge processor.

According to the web page featuring the countdown timer, fans of the system will have to wait for ’40 days’ before it premieres in New York. Yes, Asus does seem to have gotten a bit confused with their calculations. On the other hand, Engadget grabbed a screenshot of the site saying there were just 15 more days to go for the unveiling. 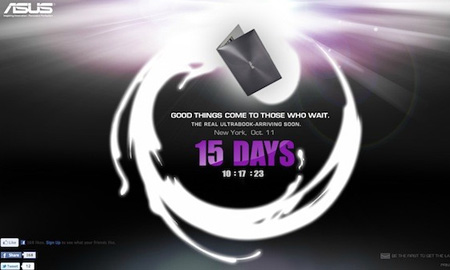 The promo also bears the lines ‘Good things come to those who wait. The real Ultrabook – arriving soon.’ Unfortunately, there’s not the slightest hint given to anything by way of technical specifications. All we know is that the notebook can be expected to be super skinny or it couldn’t possibly call itself an Ultrabook.

The third generation Ivy Bridge processor to which this laptop owes part of its moniker enables it to wake up from sleep almost instantly with the incorporated Intel Rapid Share technology. The spotlight is on very thin and highly responsive notebooks boasting of profiles lesser than 20mm.

When Intel had initially outlined the concept, it was revealed that OEM devices using Ivy Bridge would have price tags marked below $1,000. So we can naturally hope to be right when we assume the Asus Ultrabook UX series laptop will be priced no higher than $1,000.