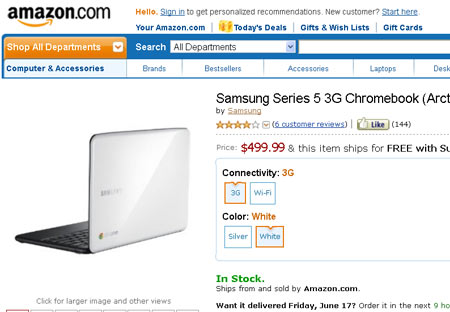 We were warned in advance about this and now the time has come to pass. The first of Google’s web-based notebooks is ready to reach fans. Amazon and Best Buy have started shipping the $499.99 Samsung Series 5 Chromebook in arctic white.

There’s hardly any need to comb through the tech specs again, but the major ones involve a 12.1” LED backlit, anti-reflective display, a dual core Intel processor and a 3.3-pound body. It embeds a couple of USB ports, a 4-in-1 memory card reader, a 1MP camera and a touchpad accommodating multi-gesture support.

Running the Chrome OS, of course, the notebook is reckoned to boot up in less than 10 seconds and deliver almost 8.5 hours of continuous use. Nearly half a day of usage on a single charge is a claim most users may want to take the company up on since battery life is always a topic of interest with portable PCs.

For those who remember, even the Acer Chromebook was supposed to be out by June 15. For now, it’s only the arctic white colored 3G version of Samsung’s Series 5 Chromebook which is ready to move out through the aforementioned sellers. Meanwhile, the titan silver edition is yet to be launched.