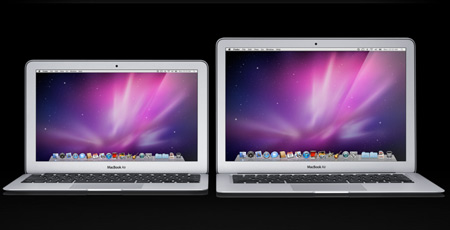 Apple obviously hasn’t had time to comment on rumors of a CDMA iPhone. The company’s been busy preparing for the launch of the all new 11” and 13” MacBook Air notebooks. In the new version, the mechanical hard disk has been ditched for the solid state storage technology used in the iPad, and there’s no optical drive.

Fitted into an aluminum unibody chassis, the 0.1” to 0.6” slim device weighs less than 3 pounds. The flash storage is said to be 90% smaller and lighter as compared to regular notebook HDDs. The seven hours or so of battery life should add to the portability factor of the new MacBook Air that houses Intel Core 2 Duo processors and Nvidia GeForce 320M graphics.

“MacBook Air is the first of a new generation of notebooks that leaves behind mechanical rotating storage in favor of solid state flash storage,” cited Steve Jobs, Apple’s CEO. “We’ve taken what we have learned with the iPad – solid state storage, instant-on, amazing battery standby time, miniaturization and lightweight construction, to create the new MacBook Air. With its amazing responsiveness and mobility, it will change the way we think about notebooks.”

The MacBook Air comes with an 11.6” or 13.3” high resolution LED backlit display and mini DisplayPort for hooking it up to a projector or HDTV including the 27” Apple LED Cinema Display. A FaceTime camera, mic, stereo speakers, full-sized keyboard and glass Multi-Touch trackpad accompany the notebook. The 13” version also happens to embed an SD card slot.

The Mac OS X Snow Leopard is preinstalled on this notebook. It includes features such as the new iLife ’11 with iPhoto, iMovie and GarageBand. Connectivity options span over Bluetooth 2.1+EDR for wireless peripherals and two USB ports as well as 802.11n Wi-Fi networking. Data may be backed up to Time Capsule and content stored or shared via MobileMe and iDisk.

The Apple Store as well as the company’s retail stores and authorized resellers are already offering the new MacBook Air. Some of the configuration options include processor choices, 4GB memory, a USB Ethernet adapter and the MacBook Air SuperDrive. The notebook’s EPEAT Gold and Energy Star 5.0 certified, with the battery being replaceable for $129.