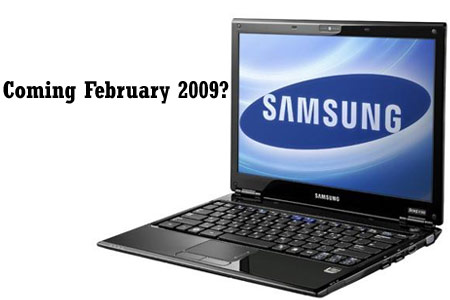 As we are near the end of 2008, there seem to be rumors all over the place about new gadgets and products. Well the latest is from Samsung. The buzz is that Samsung is all set to roll out a new 12.1 inch netbook dubbed the NC20.

The highlight of the netbook is apparently its processor. It will apparently be powered by an innovative VIA 1.3 MHz U225 Nano CPU, much unlike its predecessor, NC10 that comes with an Intel Atom CPU. The netbook should supposedly offer support for a Windows XP OS.

The Samsung Nc20 is also said to come with some other interesting features too. It supposedly bundles in a 160GB hard-drive, 1 GB RAM, WiFi b/g, Bluetooth 2.0 and an integrated 1.3-megapixel webcam. With a 3-in-1 memory card reader, the netbook will weigh around 1.5kg, slightly more than regular netbooks.

The netbook should catch the fantasy of users who need a low-power notebook. The Samsung NC20 is apparently expected to be showcased at CES 2009.

The alleged Samsung NC20 should be available to by February 2009 for around $650.