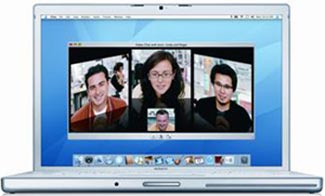 On Monday, Apple unveiled the 17-inch MacBook Pro, which is the second model in its high-end Intel-based notebook range. The system includes a 2.16 GHz Intel Core Duo processor.

All features have the screen size, which is identical to the 15-inch model, including a built in iSight camera, iLife ’06, Front Row, and MagSafe power adapter. Apple said that the laptop itself is one inch thin, and weighs 6.8 pounds.

Apple claims that apart from being larger in size, the new display of the MacBook Pro is 36 percent brighter than its forerunner. Other features include 1GB of RAM, a 120GB hard drive, an 8x SuperDrive, ATI Mobility Radeon X1600 graphics card, and DVI-out.

The latest version of Mac OS X, version 10.4.6, would also be included. Apple has slated the shipping of the 17-inch MacBook Pro within the next week for a suggested retail price of US$2,799.