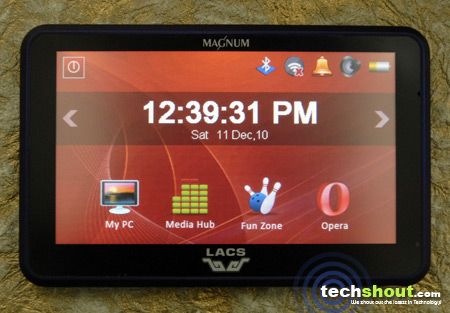 The technology scenario quite took a fresh turn after Apple actually launched the iPad. Thereafter, a range of Android devices and tablets were seen sprucing up the terrain with claims of having something more and yes it’s already a crowd. From the attention-grabbing Samsung Galaxy to the highly talked about Adam by Notion Ink, tablet-land also welcomed fresh entrants from Archos, HP, and JooJoo. Well, that seems like a lot of choice and it doesn’t stop at that. We had our hands on the Lacs Magnum LA127 tablet for a review and getting straight to the point, here’s just what we encountered.

We received the tablet in a box that was quite detailed as far as the description of the content inside was concerned. Our feelings weren’t the same as soon as we peeped at just what was bundled. The tablet accompanied by a USB cable, charger and stylus was all that was included. At first glance, the tablet looked pleasing and Lacs has given it a very alluring form counting the royal purple shade, our review unit was dressed in. What we thought looked rather sleek and light turned out to be a much bulky device when held in the hands. The tablet’s full demeanor has been complemented by its well rounded edges though.

The words Magnum and Lacs are etched above and below the screen respectively while a thick black bezel surrounds the 12.7” screen on the front. Traversing along the right edges shows a 2.5mm port, a USB charging port and a microSD card slot. The top edge holds the power on/off button and flipping the device over reveals just the speaker grill and the torch light. Minimalistic is one word that should aptly sum up the tablet’s design. When we powered the LA127 on, we were gladly received by a large and bright screen. The display used in this tablet is of the capacitive kind and wasn’t really as crisp as other capacitive touchscreens we’ve spent time with.

The interface has a retro feel to it which was well organized. It’s the Windows CE 6.0 OS that’s seen playing up on this LACS offering with an Arm 11 500MHz processor for company. The device is very user-friendly and even novice users will have no problem getting around its features. Touch is sadly a major issue on this ‘full touch’ device. While sometimes finger or stylus touches were registered instantly, in certain cases it just doesn’t budge. As funny as it may sound using the stylus isn’t a great option and could be quite frustrating when you’re in the midst of something important. Besides the main functions that are text and icon-based, the other attributes are annoyingly only icons and require you to figure out their functionality pretty much by yourself.

My PC, Media Hub, Fun Zone, Opera, Calendar, Navigator, Tools and Settings are the attributes on offer. The left top end of the screen holds the power/sleep button and the home shortcut (which only appears with certain functions). There are shortcuts to the Bluetooth, Radio DJ FM transmitter, Alarm and Sound functions on the right side of the screen. The Bluetooth was what caught our fancy almost immediately. We could transfer certain files, make calls and import all our phone contacts without any hassles though it didn’t offer any notifications for anything we did. Use it in the handsfree mode or simply employ your phone’s GPRS connection, there’s much that can be done. You can even pair it up to make the most of your phone as an FM transmitter which could be very useful with the car radio in particular. 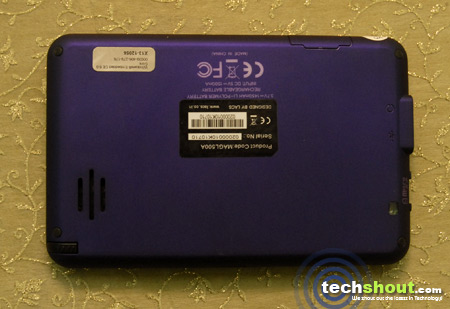 We then hopped onto the My PC feature that shows support for .doc (no .docx support), xls, ppt, pdf and wordpad files. Reading content is as easy as it can get with the tablet being optimized to do just that. Right from scrolling through content to zooming in and out or even having a document printed straight from the device, it’s very convenient. Considering the device is based on a Windows platform, all the documents are accompanied by familiar dialog boxes. The only downside to this feature is that files can’t be edited yet and Lacs says they’re working towards it. There is wordpad though that should allow you to create and edit documents. Another glitch with writing content using the device is the rather diminutive input panel which will have you hitting the wrong keys more often than you would have liked to. With documents, the menu bars too are unresponsive for most parts.

The incorporated music player is competent enough to play a number of audio and video file formats. We can claim to have faced no glitches whilst copying and pasting files too. The tablet is pretty upfront at streaming music from other devices as well. Audio quality on an average was good though it got a bit too tinny at a high pitch. Multi-tasking is stretched only as far as reading a document when listening to music. As far as video quality is concerned, it’s just about passable and not one of the best but you can watch full screen videos. The Photo Viewer function instilled in the Magnum LA127 acts up as a traditional digital photo frame and you can pair it up through Bluetooth to view pictures from other devices as a slideshow. Zooming and rotation of images are the standard attributes here.

Lacs integrates this Magnum tablet with the Opera Mini browser. The web navigation experience is complemented by the virtual keypad that pops up on the screen when you wish to enter a URL. Saving bookmarks is just one of the perks of the internet experience on this tiny tot. You can also save web pages and check your browsing history effortlessly. When trying to connect to the web, the tablet needs you to put your mind to rather good use, though when you eventually do it’s a seamless experience. You can have more than one webpage loaded up and toggle conveniently between pages. The tablet also saves downloads in a committed slot.

SatGuide’s GPS navigation service does a good job at offering complete location features. With directions provided in local languages like Malayalam, Hindi and Marathi among many others, it was by far the highlight of the device. You can save favorites, an entire driving direction or just search for points of interests. Gaming enthusiasts have lots to choose from too with the tablet coughing up more than a handful of casual games. We enjoyed playing Hangman and the Car Racer in particular. On the application front there’s also a calculator, a calendar, an alarm clock, stopwatch and torchlight. The latter features a stroboscope that let us pick from different colors for the light that’s emitted through the tablet. In Tools, there’s an option to take a Map Data backup or restore utility. The device lasted around 1 day on a single charge which isn’t a bad deal, considering the number of things we actually did simultaneously. The back of the device however got rather warm on continuous usage.

The Lacs tablet is simple and user-friendly.

The number of games packed into this device spell sheer fun and make for great company especially when on long boring trips.

The incorporated maps are comprehensive with the tablet employing GPS signals well.

The capacitive screen is very reflective and isn’t suited for low-light environments.

The Lacs Magnum LA127 hasn’t yet been designed to be interactive and is very static with no helping hand to Wi-Fi too.

It would have helped if some icons were more descriptive and included text.

Coming down to it, the Lacs Magnum LA127 is a user-friendly tablet fashioned for some basic functions. Many may agree there are a number of smartphones that are bundled with virtually all these and more. We have our reservations for the kind of capacitive touch screen fitted on this device too, especially with the kind of experience we’ve had with touch more recently. But not many tablets or even smartphones for that matter can claim to fit the Rs. 15,999 price bracket well. That’s just more than one reason why we’ve attached a 6 out of 10 score to this tablet.