Laadli the social game for a social cause from Zapak 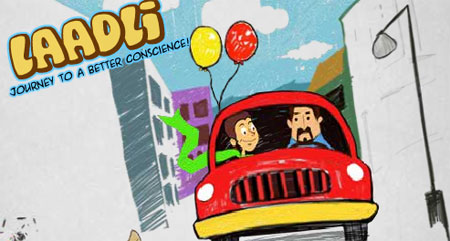 Media has always been a vital medium for disseminating important messages into our society. There are seminars, plays, documentaries, and movies made on some grave issues. Sounds very serious? However Zapak surely knows how to take what you may call a very innovative, interactive, novel way to spread message on issues as serious as gender identification and female foeticide.

Wondering on the connection between Zapak, the gaming portal and social messages?Well, Zapak has come up with a game called ‘Laadli’ based on a project of the same name initiated by Mumbai based NGO ‘Population First’.

‘Laadli’ the campaign works on spreading awareness on abolishing gender identification and female foeticide from the society. Zapak launched the game on the same on May 10 and it has been successful too!

The game was also sent as an entry to United Nations Population Fund (UNFPA) for National Awards for Creative Excellence In Promoting a Social Cause.

Gamers playing the Laadli the game, have to answer a set of questions on male to female ratio, gender selection, female foeticide which in a manner educate the gamers about the issue.

However this is not the only step taken by Zapak to fulfill its corporate social responsibility (CSR). Earlier Zapak also launched ‘Play it Safe’, a game supporting AIDS awareness. Play it Safe was launched on World AIDS Day on December 1, 2007.

There are other gaming companies as well that have mixed entertainment and social causes to educate individuals on the serious matters. Indiagames launched a game that spread the awareness on ill-effects of smoking. Surprisingly all such games have received an amazing response with Laadli getting 5,23,746 gamers and Play it Safe receiving 10,33,993 gamers as reported by Business Standard. This is surprising because initiatives like these have mostly been perceived as preachy.

Rohit Sharma, COO, Zapak, says, “Youth is primarily the target audience for Zapak and educating them while they play games is a unique way of imparting knowledge. Zapak is a socially conscious company and wants to associate with pro-social causes to give back to the society. NGOs identify and reach out to the audience we have on the site and we would love to associate with them.”