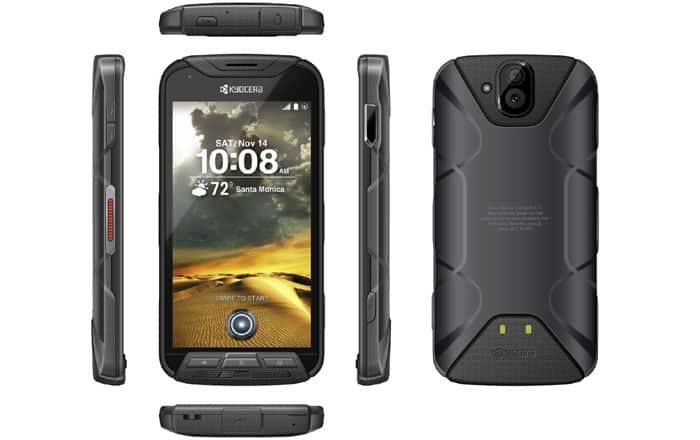 Kyocera has added yet another tough smartphone dubbed the DuraForce Pro to its lineup, this time targeting adventurous types who want a dedicated action camera to shoot in extreme environments. The brand is trying to position the handset as an alternative to products like the GoPro by equipping its snapper with all sorts of rugged specs.

The Kyocera DuraForce Pro’s camera boasts of a super wide 135-degree field of view and shoots in a 1080p resolution. It comes with an underwater and sports mode, in addition to time-lapse and slow motion skills. The company is also planning to launch a special case for the handset which will make it compatible with action camera mounts.

Of course, none of these features would be of any use if the phone itself wasn’t able to handle anything that was thrown at it. Kyocera’s built the device for durability, claiming that it’s shockproof, drop-proof and dustproof. The offering has both IP68 and Military Standard 810G certification for fortification against environments like blowing rain, solar radiation, salt fog, immersion, and temperature extremes.

Other top highlights of the DuraForce Pro include its impact-resistant 5-inch FHD screen, built-in encryption, fingerprint scanner, and a useful Glove and Wet Touchscreen Operation to make sure the display is responsive even when using wet or gloved hands. It’s also been blessed with a 100+db dual-front speaker setup for louder sound even in noisy environments.

Here’s a neat look at the top specifications of the Kyocera DuraForce Pro:

The Kyocera DuraForce Pro doesn’t have a price tag yet and is set for a fall release. It’ll probably be competing with Samsung’s own rugged Galaxy S7 Active, alongside professional action cameras like the GoPro Hero series.