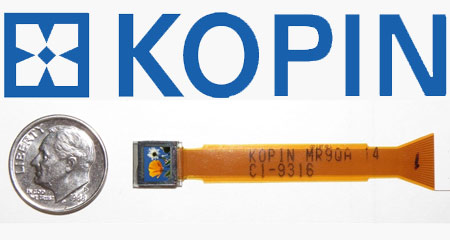 Kopin announces a novel breakthrough to further reduce the size of its color displays. The company made public that it has now shrinked the color dots of its displays to just about 2.9×8.7 µm as against the earlier announced 3.75 x 11.25 µm.

As far as high-resolution electronic viewfinders for camera systems are concerned, Kopin’s high-density displays and patents give the company a strategic position. The company now claims to have gained a full-color VGA display that has a resolution of around 600 x 480 in a mere diagonal size of 0.27”. This, the company indicates is the smallest VGA color-filter liquid crystal display (LCD) in the world.

“Our new VGA display with the smallest color dot in the industry is a major milestone for Kopin’s technology roadmap to provide more compact, higher resolution and lower power consumption displays,” remarked Dr. Boryeu Tsaur, Kopin’s Executive Vice President and General Manager of the Display Business Unit. “This exciting achievement is enabled by our innovative process improvements and unique pixel design, and results in an additional 40% reduction in display size.”

For the use of an LCD with a magnifying lens on a camera system, the company has two issued U.S. patents. Viewing an image in a camera with an LCD having resolution equal to or higher than VGA, the company suggests that these patents are linked to a camera that has an active matrix LCD with red, green and blue light emitting elements.

Coupled with Kopin’s new compact, energy-efficient displays, these patents are expected to put the company above others in the arena of emerging DSLR cameras with high-resolution electronic viewfinders.