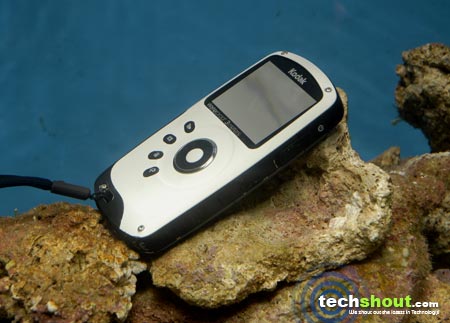 We didn’t mind learning a trick or two from the Kodak PlaySport Zx3 video camera when it came knocking on our doors for a review, but not before we had it thoroughly scanned. It wasn’t until the 1980s that such devices were actually built for personal use. From being bulky and heavy machines, the efficiency of these gizmos was upped by the fact that they had shed a majority of the flak. It took expertise from companies like Sony, JVC, Kodak and others to bring the pocket-able video cameras, we now call as camcorders in the midst of all the action. It’s the race for additional megapixels coupled with what you can actually do with it that has enthusiasts yearning for more. Well, being able to make a movie of your submerged antics should surely then feature among the histrionics of video lovers.

Bubbles on the package we received prepared us for the splashy journey we were likely to set on. Interestingly Kodak bundles in virtually all the fixtures needed to get the most out of this waterproof camera. In the box we found a battery charger, USB cord, HDMI cable, AV cable, PlayStrap, user guide and warranty card besides the camcorder of course. While nearly all manufacturers are gung-ho about how HDMI capable their device is, Kodak’s gone a step ahead and thrown in the cable too so you don’t have to go searching places for it. There’s something instantly likeable about the Kodak PlaySport Zx3 from the word go with our unit following a rugged white and grey theme. You can also choose to pick it up in purple and blue backsides with the front white hue staying common. We would have preferred a more colorful front though as the basic white color makes the device pick up dust too soon.

A firm grip is what you can expect when you hold the Kodak PlaySport Zx3 in your hands courtesy of the rubberized fabric; you’d have to be really clumsy to slip this one off. In the form factor that it sports, the device is very pocket-friendly. We like how the front face is distributed with buttons which while being clutter free is also pleasing to look at. There’s a four-way center button having the white area assigned to record/ok functions and surrounding keys in the black portion for navigation. To its left is an angular placement of the Liveview/LCD Glare Shield, Review mode, Delete and Settings knob in order from the top. The right panel is fitted with a USB port, an HDMI out and the AV out, secured firmly by a lockable flap. Just above this portion is the power on/off button. The left chassis of the video camera holds the battery compartment which shares space with the memory card slot (SD/SDHC cards only). The strap post complete with the PlayStrap appears in the bottom region. As we moved to the lower edge of the video camera, we spotted a tripod socket next to which is the speaker. Flip the device over and the rear side flaunts the F2.8 lens embraced by a video recording light which glows red during recordings. The microphone and the IR receiver also feature here. 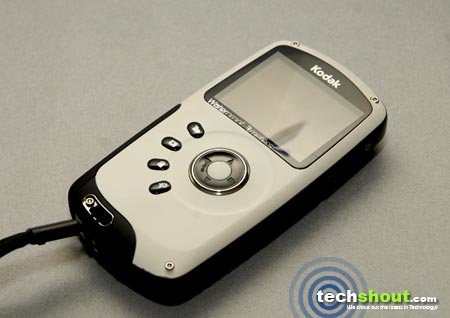 We were pushed straight into the video recording mode when we switched the device on. So Kodak does make it pretty straight, no complications and no weird settings, a simple button push and you should be able to record videos instantly. Hitting the right navigation key popped up the options to record videos in 1080p, 720/60 fps, 720p and WVGA modes. Still images, it revealed could be snapped up in a 5MP resolution. We liked how effortless it was to switch between the image and video modes. The top and bottom navigation buttons then let you zoom in and out on the subject to be captured. We were quite impressed by the details offered when recording even in the WVGA mode. Need we say that shooting in 720p and 1080p while turning and twisting our recording weapon of choice offered us high quality videos too. The display lights up with detailed icons in the video mode including the battery and memory status.

As soon as we hooked up the Kodak PlaySport Zx3 camera to our PC, the ArcSoft MediaImpression for Kodak software asked for an installation. Watching our videos on the PC revealed a slight graining for close-ups though the overall clarity of content was retained. Transferring images to and fro isn’t a hassle and the device is pretty upfront at that. A quick look at the software wrapped in said it’s pretty good for home use with instant connectivity to Facebook, YouTube and Vimeo. After all this, the battery compartment was quite on its way to becoming a toaster. We then got to the main feature the rugged waterproof video camera has been designed for, underwater shooting. We put the device straight in our fish tank and got a neat video shot at 720p whilst scaring the daylights of our original hydro-residents. The Kodak PlaySport Zx3 seems pretty much at ease when it’s put to task underwater and interestingly also proffers much better recording quality than it does outside water. And it doesn’t take more than a minute of soft towel rubbing to dry the device when out. If water does happen to enter the innards, the manual suggests drying it for 24 hours before being used again.

Those who keep customization high up on the list can jump straight into the settings which has a plethora of options. There’s the PAL and NTSC video formats for 25fps and 30fps recordings, the ability to tweak the screen brightness, set the date and time, volume settings, microphone settings, set H2O mode and keep autofocus off or on. You can stabilize images with the EIS feature here too while the SD card can also be formatted. If viewing videos on the puny screen of the camcorder is not what you fancy, you can hook up the device using the HDMI or TV connection cable by simply plug-and-play. Resulting videos playing on the TV of choice are clear and pretty detailed keeping noise to the minimum. The camcorder is serious at picking up even the slightest sound made in its vicinity. When left idle, the camera goes off on its own, saving on precious battery life. 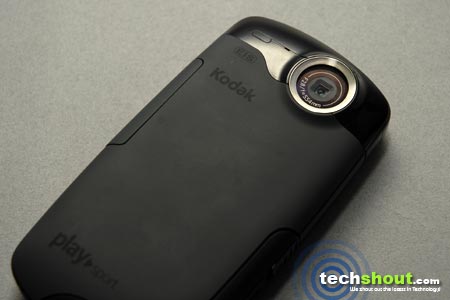 The PlaySport Zx3 sure knows its job well and with the camera in your hands, you’ll sure want to stay longer underwater.

We love the clutter free design rounded by the rugged tailoring that actually makes it a great companion for outdoor activities.

The interface is very simple to get through and doesn’t require you to be a video junkie to know the ins and outs.

We would have liked if the four-way button was more finger friendly. It does take a bit longer than expected to register presses.

A 21MB internal memory does nothing to help you save more than around 8 still images and a 15-20 sec video minus the memory card. So yes if you do happen to forget you memory card, you’re left stranded.

It only helps when instructions and guidelines are accompanied by text instead of being icon only. That leaves you to do much of the figuring out by yourself.

All in all, the PlaySport moniker quite sums up what the Kodak Zx3 has to offer. For all those hitch-hiking or insanely funny moments you wouldn’t want to miss out on, the device will let you make a movie. Even its 5MP still image ability is up to the mark if not all that great. Rough and tough right to its core, the video camera’s H20 performance was certainly above average and we can claim it be a fully functional one in that space. There’s not many gizmos afterall that can boast of having accompanied you down under the water. We give it a 9 out 10 for doing what it does best, underwater shooting and that too quite effortlessly.