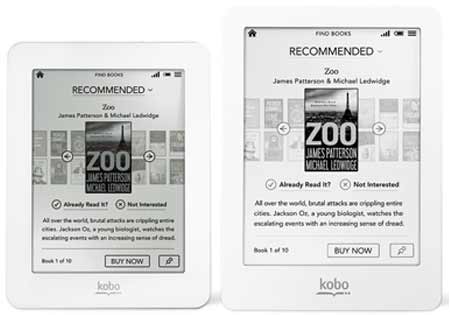 A new family of devices featuring the Kobo Glo, Kobo Mini and Kobo Touch eReaders as well as the Kobo Arc tablet, has geared up to make its debut in the next couple of months. They are slated to be made available through leading retailers such as Walmart and Best Buy.

First up is the front-lit Glo that is deployed with the ComfortLight technology to facilitate reading in all kinds of lighting conditions. Its no-glare high resolution E Ink screen provides a multi-touch real estate of 6 inches and the Wi-Fi-enabled slate tags along some customizable fonts as well as page-turning features. It is splashed in shades of black, white, pink, blue and silver. The pocket-friendly 5-inch Mini E Ink eReader will be released in hues of black and white with interchangeable teal, red and purple SnapBacks. Users can save as many as 1000 eBooks on it.

“Our focus has remained firmly on delivering a superior experience for booklovers around the world. With 11,000 booksellers and leading retail partners across five continents, we are bringing the new Kobo Family to booklovers everywhere. The new Kobo Family provides more choice for booklovers and a superior eReading and content discovery experience – truly, an eReader for everyone,” commented Michael Serbinis, CEO, Kobo. 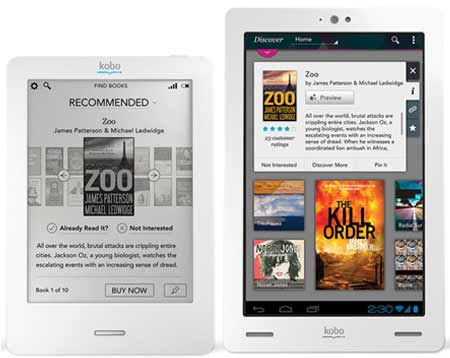 Powered by the Android 4.0 platform tweaked with Tapestries, the Kobo Arc employs a 7-inch display and a 1.3MP camera. Its front-mounted speakers render an enhanced acoustic experience, thanks to SRS TruMedia and are accompanied by a built-in microphone. The tablet comes loaded with applications like Rdio, Zinio, PressReader, Facebook and Twitter amongst others and permits users to access the Google Play store. It will be available in black and white shades along with blue- and purple-colored SnapBacks. A more customizable Touch eReader has also been introduced for a reduced price.

The Kobo Glo priced at $129.99, is now up for pre-order through select retailers in the US, Canada, Europe, Australia and New Zealand. The $99.99 Kobo Touch has already hit stores across the world. The Mini carries a price tag of $79.99 and will start shipping along with the Glo from October 1. Slated to be made available in November, the 8GB and 16GB variants of the Kobo Arc will cost $199.99 and $249.99, respectively.