Kobian has released the Mercury mTab streaQ Duo voice calling tablet for users in India and has attached a rather affordable price tag to the gadget. You can now purchase Mercury tab through select retailers by forking out Rs 10,050.

The device doesn’t offer anything that’s never seen before, but we must say that it brings all the essential features that users look for in their mobile companion. First and foremost, it completely eliminates the need to carry a smartphone as it extends support to SIM cards and the presence of dual SIM card slots is like the cherry on top of the cake. So it can make voice calls, and thanks to the built-in 3G module, the slate supports this data speed out of the box. 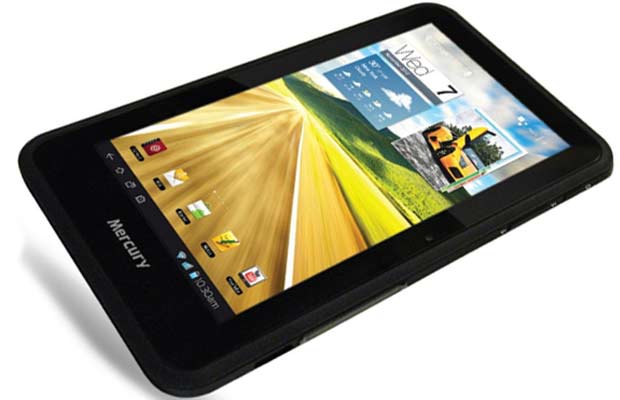 Its 7-inch multi-touch capacitive display has an aspect ratio of 16:9 and manages to render clear visuals in 1024 x 600p resolution. And the intuitive interface that the screen projects can be attributed to the Android Jelly Bean 4.1 OS. Snap-happy users can look forward to dual cameras, a 2MP one on the rear panel and a 0.3MP snapper on the front. And if that’s not enough, the Flash 11 Online Video-equipped tablet supports full HD video playback too.

An MTK 8577 dual core processor sprinting at a speed of 1.2GHz takes care of the internal working with the help of 1GB of DDR3 RAM. Its total internal memory amounts to 8GB and can be expanded by up to 32GB using a microSD card. The other features include Wi-Fi, GPS, Bluetooth and more.

The Kobian Mercury mTab streaQ Duo is available at Infibeam for a price of Rs 10,049.