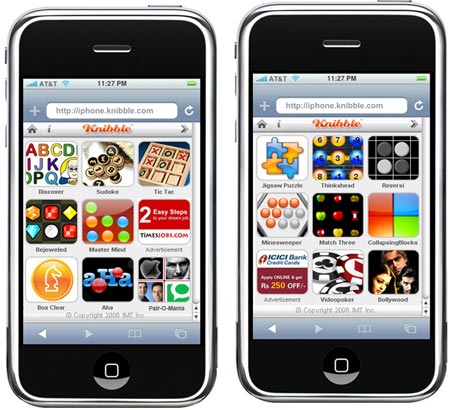 The last we heard of any games for the iPhone was way back in July when PopCap released its ‘Bejeweled’ casual game for the revolutionary touch screen phone.

To fill up this huge void, popular casual game site Knibble.com has announced the launch of a portal optimized for use with the Apple iPhone.

The Knibble iPhone portal will be kicking off with eight games including the already launched Bejeweled game.

The best part is that all the games on the Knibbles iPhone portal are absolutely free of cost.

So if you are one those people who are lucky enough to have an Apple iPhone and you are desperately in a need of a gaming fix, then the Knibbles iPhone portal is the place to go.

You can access the Knibbles iPhone portal from this site on your iPhone.