We’ve been hearing a lot about upcoming Samsung phones and tablets, but what about the future plans of the other South Korean conglomerate that delivered pretty great devices last year? While only a couple of upcoming phones have been rumored, a new leak suggests that the LG is working on 5 more devices, all running Android 4.4 KitKat.

The handsets were spotted by PhoneArena on the HTML5Test benchmark. First on the list is the LG D830 which was under speculation back in November as well. The device could be the successor to the Optimus G Pro and it might carry the G Pro 2 moniker. What’s known about the phone is that it will have LTE connectivity and a 1080p display. The screen size, however, hasn’t been disclosed. 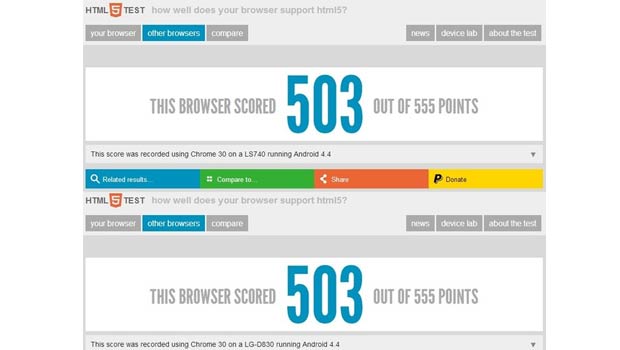 Next up is the LS740 that’s rumored to be Sprint-bound. LG apparently uses similar model numbers for the carrier in question, where the majority of its devices have the LS branding including the upcoming G Flex that’s listed as LS995. The LS740 also made an appearance at the Bluetooth SIG which confirms that it will feature LTE connectivity. PhoneArena highlights that it is likely to be the successor to the 4-inch LG F3 that goes by model number LS720.

Apart from the aforementioned two smartphones, other devices such as the LG D410, D320 and MS323 were also spotted on HTML5Test with KitKat. There have been rumors that LG plans to launch a compact version of the flagship G2. The phone was previously spotted under the model number LG D-410 and a few specifications were disclosed.

Alleged specs of the G2 mini

The MWC 2014 is a good place to see LG launch its new portfolio of smartphones. We’re likely to see a new line of L Series and F Series at the expo next month.