There has been a lot of debate on whether the international Samsung Galaxy S3 would get updated to Android 4.4 KitKat and it looks like users are in for some major disappointment. A confirmed list of devices scheduled for the upgrade has been leaked and it states that KitKat has been cancelled for the Exynos model of the 2012 flagship.

SamMobile is the source of the roster (see below) and their information is very reliable, taking past leaks and reports into consideration. The reason behind the cancellation of KitKat for the Samsung Galaxy S3 GT-I9300 is due to ‘unsolved problems.’ The website mentions that Samsung has had a hard time getting its TouchWiz apps up and running on the handset and the low availability of RAM which is just 1GB (the US variant has 2GB), is also to be blamed. 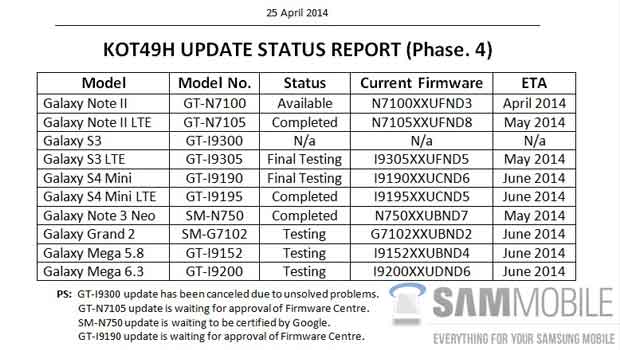 The LTE model, however, is scheduled to receive Android 4.4.2 KitKat by the end of this month and the firmware is in the final testing phase. The Note 2 LTE and Note 3 Neo are also expected to get the latest Android OS in the next few weeks, while devices such as the Galaxy S4 mini (LTE model included), Grand 2, Mega 5.8 and Mega 6.3 should get updated next month. SamMobile also notes that Samsung is working on version 4.4.3 for the Galaxy S5 and some of the aforementioned phones could get bumped to the upcoming release instead of 4.4.2.

The Samsung Galaxy S3 has passed the promised 18 months of support and the company isn’t obligated to update the phone to the latest release. Well, at least they tried and it’s good to see that the LTE model has been given some special treatment.