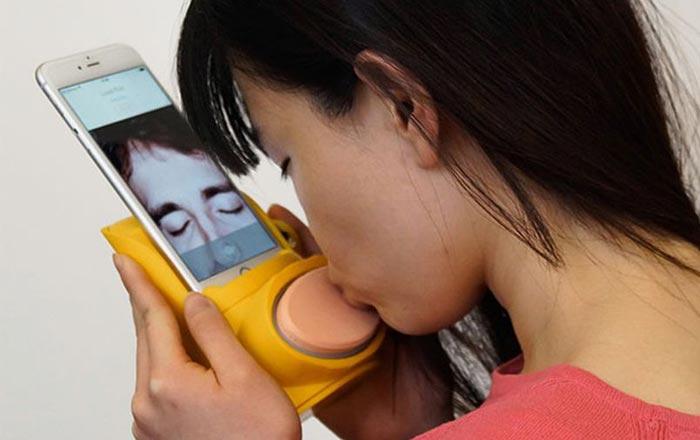 Researchers from the Imagineering Lab at City University London have come up with a novel concept to keep long-distance relationships alive. They’ve produced a smartphone accessory called the Kissenger that claims to replicate a loved one’s kiss through the magic of science.

The Kissenger basically looks like a large handset dock with a large silicon pad in front. The first working prototype of the gadget only works with iPhones, iPads and iPods as of now. Users simply have to plug the product into their device’s headphone jack to get going.

This would of course be a bit more complicated for headphone jack-less iPhone 7 owners. Once the Kissenger’s been plugged in, all a person has to do is fire up the companion app and kiss the silicon lip. High-precision piston sensors then do their best to measure the dynamic forces at different parts of their lips.

This information is then transmitted to the iPhone and sent to the individual at the other end in real-time. The team behind the Kissenger claims that it recreates the kiss via miniature linear actuators which are supposed to produce a realistic kissing sensation. The recipient can also send a peck back.

The researchers assertions may or may not be realistic given the fact that it’s impossible to recreate a life-like kiss between two people simply via a device. It comes across as more of a novelty item than something which could catch the imagination of the public.

The Kissenger is still at the working prototype phase as of now, so you’ll have to wait a while before sending a virtual kiss to your partner.