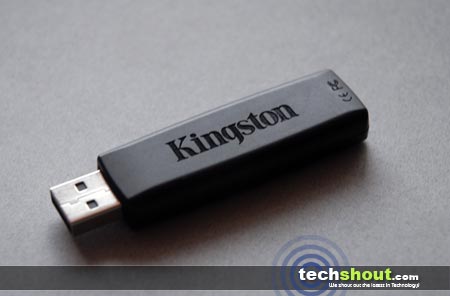 Memory products manufacturer Kingston has recently introduced a new member in its DataTraveler line-up of USB flash drives. Dubbed DataTraveler 100 (DT100), the latest entrée has a capacity of storing up to 1, 2, 4 and 8GB of data fully compatible with the USB 2.0 HiSpeed transfer rate.

DT100 is nice and sleek but somewhere does not have a very attractive looking black-colored body. It measures 59.7mm x 22.3mm x 9.5mm, which is pretty much the size of an average 4GB USB Flash Drive. It weighs around 12 grams.

One of the biggest advantages of the Kingston DT100 is its slide out USB port, which eliminates the need to attach a cap every time one is done using the storage device. All you need to do is press it on the side, and the USB port slides out. However, this convenience can perhaps also turn out to be a bane, because if the slightest amount of water enters the capless USB port head, it could spoil the device, leaving it useless for further use. 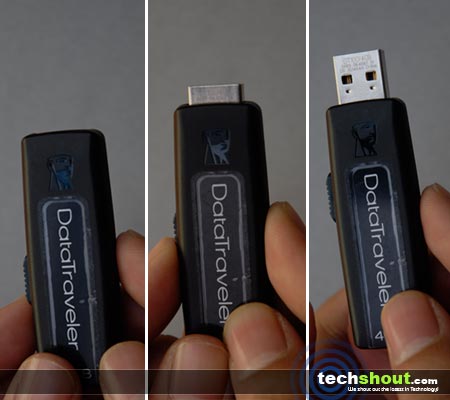 Kingston’s DT100 series is compatible with most of the commonly used operating systems such as Windows Vista / XP / 2000, Mac OS, and Linux. However, it does not support the Ready Boot feature.

For testing, we transferred two movies, Curse of the Golden Flower (701 MB) and Fantastic Four 2 Rise of Silver Surfer (698 MB), coming to a total of 1.36 GB, from our computer to firstly the Kingston DT 100 and also to Transcend’s 4GB JF V60 USB Flash Drive, which is also fully compatible with Hi-Speed USB 2.0.

Whilst the Kingston USB Flash Drive took around 6 minutes and 54 seconds for the above mentioned data to be successfully transferred, Transcend’s device took around 28 minutes, whish is way too long. Thus, this does mean that the DT100 is relatively fast in its data transfer speed.

The Kingston DT100 is priced at Rs. 2,272, which is quite reasonable keeping in mind the 4GB of storage that it offers which is surely decent enough for its price.

TechShout gives the Kingston DT100 4GB USB Flash Drive an 8.5 rating, since the price matches the features and performance of the device competitively.