Amazon has announced that the sixth generation Kindle device, the new Paperwhite has been launched in India and the e-retailer is now accepting pre-orders for the same. It will start shipping on February 4 and will also be available at more than 250 retail outlets in major cities in the country. The eReader arrives in two variants, Wi-Fi-only and Wi-Fi + 3G, both of which fall in the sub-15K category.

The high contrast display boasts of improved reflectivity and is said to be capable of making the gadget appear like physical books. And just like its predecessor, the Paperwhite has a built-in light which is guided towards the surface to facilitate nigh-time reading without straining users’ eyes. A tighter touch grid is what is responsible for better responsiveness. 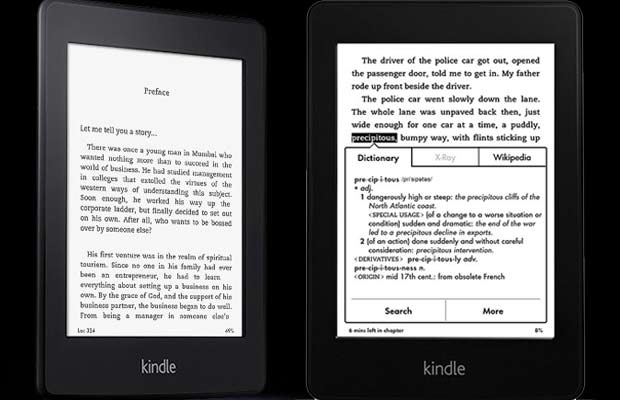 Whispersync continues to be present in the device, allowing you to read an eBook on any device featuring the Kindle app. Complete with a faster processor, the eReader brings a number of useful features such as Page Flip, Vocabulary Builder, Smart Lookup, In-line Footnotes and more to the table.

Further, the device is comfortable to hold and tips the scales at merely 206 grams. It has a power life that lasts for about 8 weeks at a stretch. The slate offers access to the cloud as well as social networking sites like Facebook and Twitter and you can even make use of the Parental Controls feature when giving it to children.