Google’s Nexus 7 is about to face some fierce competition as Amazon has unveiled its next Generation tablets, the Kindle Fire HDX series. The new lineup comprises of a 7-inch and an 8.9-inch slate, both carrying beefier specifications compared to that of their predecessors and a new platform dubbed Fire OS 3.0 Mojito which is based on Android.

As previous rumors have suggested, the Kindle Fire HDX series is indeed powered by a quad core Snapdragon 800 processor clocked at 2.2GHz. Accompanying the high performance CPU is 2GB of RAM for better responsiveness. 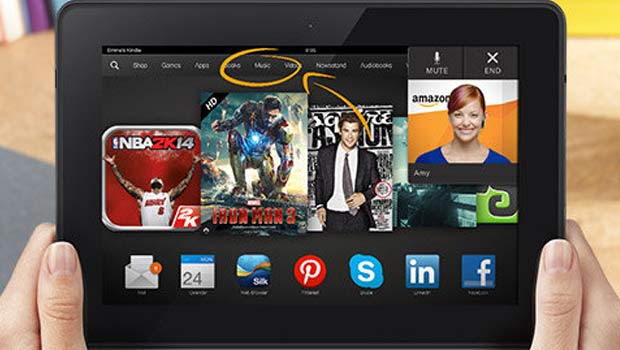 The new slates are entertainment focused and Amazon has equipped them with dual stereo speakers powered by Dolby Digital Plus sound for a rich experience. There’s an HD camera on the front of both devices and storage options of 16GB, 32GB and 64GB. Apart from Wi-Fi connectivity, the tablets will offer optional 4G LTE support. The 7-inch model measures 186mm x 128mm x 9mm and it weighs 311 grams.

The Kindle Fire HDX slates are available for pre-order through the company’s website. The 7-inch model starts at $229 with special offers or $244 without sponsored content, while the 4G LTE versions are priced at $329 and $344, respectively. The Wi-Fi-only 8.9-inch model is initially priced at $379 with special offers or $394 without ads. For the one with cellular connectivity, you’ll have to shell out a minimum of $479. LTE options are available for AT&T and Verizon networks only.