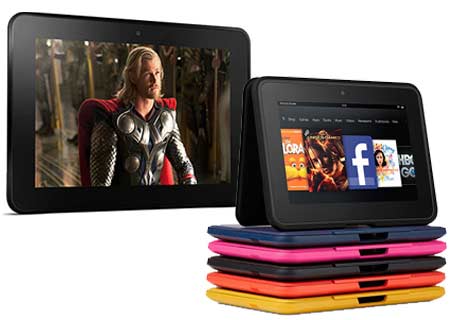 The Amazon Kindle Fire HD 7 and 8.9 release date details have been divulged as both tablets are now official in India. Amazon plans on offering the Android-based slates with affordable retail tags by the end of the month through its country specific online store and we’re not talking about Junglee.com. They will be accompanied by the original eReader as well as the Paperwhite version.

The Amazon Kindle Fire HD 7 and 8.9 went official back in September of 2012. Just last month, the company announced that the duo was up for pre-order in over 170 nations worldwide. And yes, it took the e-commerce giant 9 months to bring the slates into the country. Well, for those who aren’t aware, both devices have been on sale for quite some time now, not officially though. 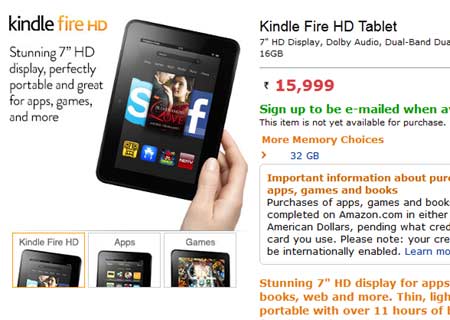 Not long after they went live in the US, various retailers started to import units and make them locally available through eBay and other sources. The Amazon Kindle Fire HD 7 as its name suggests, is designed with a 7-inch HD LCD panel proffering 1280 x 800p resolution. The device measures 19.3cm x 13.7cm x 1.03cm in dimensions and it weighs 396 grams. A dual core 1.2GHz OMAP 4460 processor powers it up, while the internal battery is capable of delivering up to 11 hours of activity.

Coming to the Amazon Kindle Fire HD 8.9. This piece of hardware is larger in dimensions which are 23.9cm x 16.3cm x 0.9cm, and it packs in a wider screen as well, that’s 8.9 inches with 1920 x 1200p resolution. Here, a dual core OMAP4470 CPU operating at 1.5GHz does the heavy lifting. Buyers can expect to receive around 10 hours of battery life from this 567-gram tablet. Both aforementioned slates are equipped with dual Dolby Audio stereo speakers, free Cloud storage for content from the company and 10-point multi-touch IPS panels. 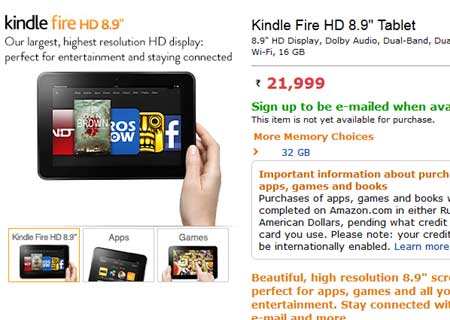 The 7-inch 16GB Kindle Fire HD will be available for Rs 15,999, while the 32GB version will retail for Rs 18,999. The 8.9-inch version also comes in the same storage options as its smaller sibling carrying price tags of Rs 21,999 and Rs 25,999, respectively. The company states that both tablets will be released on June 27 through its online store and various retailers, namely Croma, Reliance Digital, E-Zone and Vijay Sales, in cities such as Chennai, Kolkata, Chandigarh, Ahmedabad, Delhi, Mumbai, Bangalore, Pune and Hyderabad.