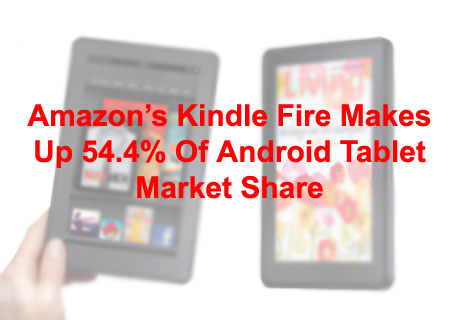 Given that Amazon devices were selling in millions a few months ago, the news about the Kindle Fire capturing more than 50% of the Android tablet market share doesn’t quite come as a surprise. This report was recently made public by comScore which also stated that devices with 10-inch displays have higher chances of being picked up than 7-inch slabs.

The Kindle Fire had apparently managed to acquire a 54.4% share in February 2012, nearly double from the previous 29.4% recorded back in December 2011. Next in line was the Samsung Galaxy Tab family which stood at 15.4%. Both slates were followed by the Motorola Xoom that was at 7%, while the Asus Transformer and Toshiba AT100 came in at 6.3% and 5.7%, respectively. Along with these details, the Virginia–based internet marketing research company announced the launch of its next generation Device Essentials service.

“comScore is excited to introduce our next generation Device Essentials product, which provides new insight into digital device usage and detailed reporting of traffic patterns within local markets,” commented Serge Matta, comScore president of mobile & operator solutions. “These new insights are invaluable to all stakeholders in the mobile ecosystem as they seek to provide valuable services and optimize the mobile media experience for their customers.” 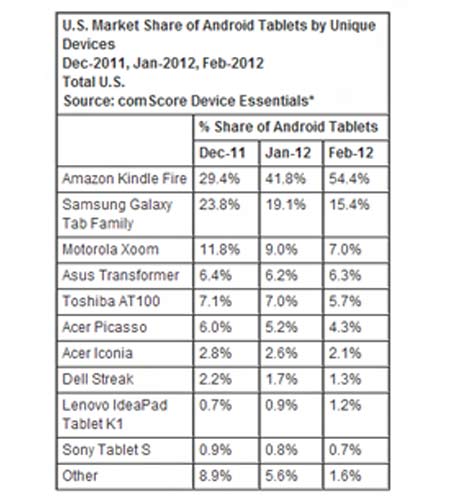 The Kindle Fire was first introduced back in November of 2011. Throughout the holiday season, the tablet and other Kindle eReaders by Amazon were reported to have achieved an average sale of around a million per week. The aforementioned market share analysis was carried out over a span of 3 months, namely December 2011, and January as well as February of 2012.

The 7-inch Kindle Fire price sums up to $199 through Amazon. And it’s price point is probably another driving factor behind its success.