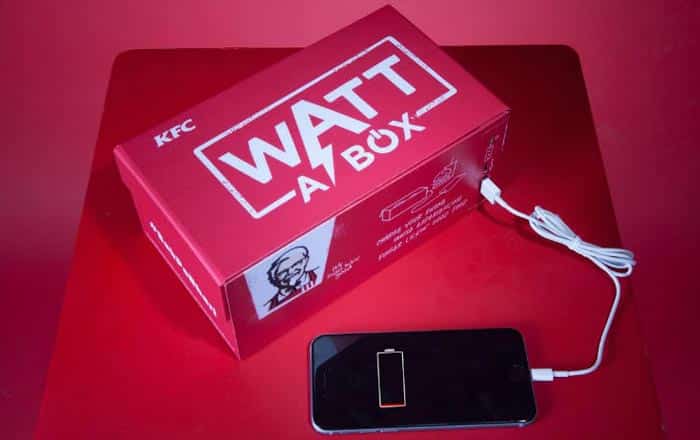 KFC has come up with some pretty crazy campaigns before, but its new one takes the cake when it comes to bizarre ideas. The fried chicken brand is giving away a 5-in-1 box meal called Watt a Box which lets you charge your phone while diving into all the greasy food the restaurant has to offer.

The Watt a Box will probably be music to most people’s ears, a majority of whom have suffered the pain of having their phone die on them while sitting down for a meal. Sadly, the offer is limited to only Mumbai and Delhi for now. KFC isn’t just handing them over either, so you’ll have to participate in an offline or Facebook contest to win it.

KFC understands that not everyone goes around carrying cables for their phone, which is why the Watt a Box also includes cables. iPhone and Android users won’t have to worry about their handset not being compatible with it either, since the box features USB, microUSB and Lightning connections.

The star of the show is of course the 6100mAh power bank which has been integrated into the Watt a Box. KFC thankfully lets you take it out of the 5-in-1 box, preventing a greasy scenario where you have to lug around a huge empty box to charge your device.

However, as with any promotion which offers a freebie, the Watt a Box might not be the free power bank of your dreams. BGR put the product through its paces and found it wanting. It could only boost an iPhone 5S by 17% in 30 minutes before the battery drained out.

The site then recharged the power bank to 100% and proceeded to test its abilities on a Redmi Note 3. Even this experiment yielded similar results, only turning the needle by 7% before the power bank died again. If accurate, this means the Watt a Box can only offer enough fuel to bring your smartphone back from the dead and nothing more.