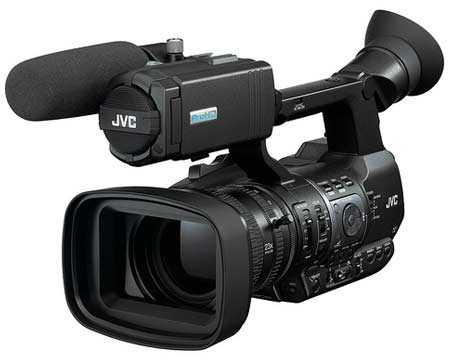 The ongoing NAB 2012 has witnessed the debut of the JVC GY-HM600 ProHD handheld camera that is slated to be made available in fall this year. Its low-light performance, high sensitivity and other such features are said to make it apt for fields like independent productions, sports and news.

The versatile JVC GY-HM600 ProHD camera is lightweight and can record HD footage in file formats such as XDCAM EX, AVCHD, Final Cut Pro and more. It extends support to relay mode and saves the recorded footage onto SDHC or SDXC memory cards. Featuring a 3.5-inch LCD screen, it also facilitates shooting while the camcorder is propped up on a tripod. The handle of this imager has been embedded with a second trigger in addition to a servo zoom control, for added convenience.

Furthermore, the company has included the Pre Rec function to save an additional five seconds of footage to cache memory. The snapper employs three 12-bit CMOS sensors of 1920 x 1080p resolutions which are accompanied by a Fujinon HD lens of a 29mm – 667mm focal range. Besides auto focus and face detection, the camera boasts of the optical image stabilizer that helps eliminating the blurring effect.

Needless to say, it is equipped with a microphone for capturing audio along with a mic holder, two XLR outputs and an input for a wireless mic receiver. The manufacturer has also thrown in a headphone jack, a time-code synchronization input, HDMI connector and HD-SDI output. Moreover, it comes with a LANC remote connector and can be used in conjunction with the JVC ProHD Compact Studio 7-inch monitor for editing flexibility.

The JVC GY-HM600 ProHD release date and price details reveal that it will hit store shelves in fall this year for $4,695.