Just a Cup of Coffee a day helps prevent Cirrhosis of the Liver, Researchers claim 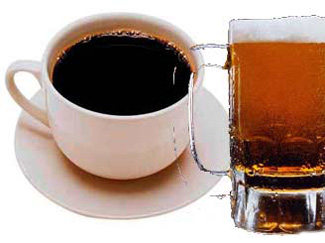 Researchers have endorsed the fact that coffee intake can act as a protection against one of the worst effects of alcohol. Alcoholic liver cirrhosis progressively scars the organ, and is known to be affected by a number of factors including smoking, diet, infection and genetics – as well as alcohol.

The team at the Kaiser Permanente Medical Care Program in Oakland conducted a survey in over 125,000 cirrhosis-free patients between 1978 and 1985. Participants were questioned about their alcohol, coffee and tea consumption and their progress monitored. By 2001, 330 had been diagnosed with the liver disease, of which 199 were alcohol-caused.

For every cup of coffee participants drank each day, the researchers calculate they were 22 per cent less likely to develop alcoholic cirrhosis long term, strengthening earlier findings by the team and other groups. More info here.

Reporting in the journal Archives of Internal Medicine the authors wrote: “The data do suggest that coffee intake may partly explain the variability of cirrhosis risk in alcohol consumers.” The relationship is supported by findings from blood samples, which showed the amount of damage-indicating enzymes released by the liver is less if the patient is a coffee drinker.

Drinkers can’t expect the effect of a lifetime of heavy boozing to be lessened by a cup of coffee in the morning however. The authors, led by Dr Arthur L. Klatsky, warn: “Even if coffee is protective, the primary approach to reduction of alcoholic cirrhosis is avoidance or cessation of heavy alcohol drinking.”

The same study found coffee drinkers had healthier results on blood tests used to measure liver function, whether or not they were heavy alcohol users. Coffee’s effect on reducing liver enzymes in the blood was more apparent among the heavy drinkers in the study.

The researchers found no reduced risk of cirrhosis for tea drinkers. Tea has less caffeine than coffee and there were fewer heavy tea drinkers in the study, so if caffeine is the protective ingredient, an effect may not have shown up for tea in the study, Klatsky said.