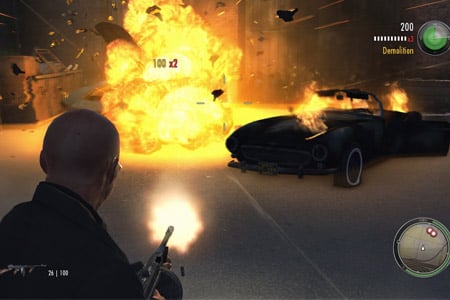 The Mafia II game has been received with mixed feelings among gaming enthusiasts. In what’s claimed to be a high on action gangster sequel with some nifty appearances, its long scenes though are said to take away the substance from the style. With revenge in the air, 2K Games has a good enough reason to let gamers indulge in some more gun firing moments. Jimmy’s Vendetta add-on for Mafia II is the next downloadable pack that will hit the game starting tomorrow.

Housing over 30 quests in Empire Bay, the second action-infused downloadable game add-on should add more thrill to the epic crime game. Players will find themselves in an arcade-style gameplay that also includes leaderboard ranking. Players traverse through an alternate perspective of the mob as seen by Jimmy. The latter is the guy whom others call on when a job needs to be finished.

Helping Jimmy clean up other’s messes, staying in the underworld of Empire Bay will see them deal with Italian and Irish mobsters. A plethora of exciting quests are unfurled as gamers progress, counting assassinations, timed vehicle pursuits that may end in dramatic shootouts and explosive car chases. Courtesy the add-on there seems to be lots that can be done. Executing ghastly head shots or explosives, garnering scores for accurately-timed vehicular power slides, high jumps and a boosted engine are among the many excitements.

Bonus points are added to the overall scores courtesy the multipliers and combos. These will be posted instantly to the new online leaderboard system offering a wide re-playability, enabling players to move up in the ranks. The engaging narrative in Mafia II puts players into the dark and organized crime world of the Mafia. It bears an M rating by the ESRB and is available across the world.

Players can expect to download Jimmy’s Vendetta for the PS3, Xbox 360 and Windows PC at a price of for $9.99 or 800 Microsoft points.