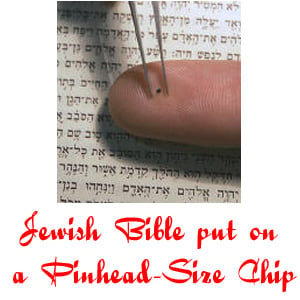 The world got small, smaller, really small, well agreed, but one can’t remotely imaging that a book comprising of 300,000 words shrunk to the size of a pin head…or even smaller!

The complete text of the Jewish Bible has been carved on a chip, which is less than the size of a sugar grain. This entire initiative has been exercised by a team of scientists in Israel.

According to the nanotechnology experts at the Technion Haifa Institute of Technology, the text measured less than 0.5 sq mm, which was written on a silicon surface covered with a thin layer of gold (20nanometres thick – 0.0002mm).

The microscopic Bible comprising of 300,000 words was produced by blasting tiny particles at an object that then rebounded, resulting in an etching effect.

According to Zohar, when a particle beam is directed toward a point on the surface, the gold atoms bounce off and expose the silicon layer below just like a hammer and chisel.

Apparently, as per Zohar, in future the technology would be employed to store huge amounts of data on bio-molecules and DNA.

Just one question, what’s next?