Jett Rocket, Mario Tennis, Robin Hood and more for the Wii this week 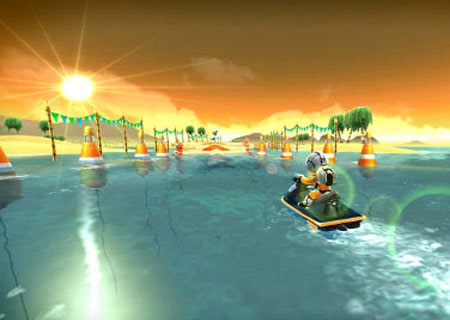 The 3D action adventure Jett Rocket is published by Shin’en Multimedia and lets gamers traverse through the planet of Yoroppa. They must get to the bottom of just why the planet is being threatened by Power Plant Posse. There are beautiful environments strewn all across the vast terrain such as cold glaciers, poisonous swamps and tropical islands. Gamers will be able to parachute from cliffs, conquer the ocean with the Jet Boat or hop onto the Jet Snowboard and Jet Turbine to either speed through or skyrocket their way through levels.

Publsihed by JV Games, Pong Toss Pro – Frat Party Games incorporates a revamped throwing system for better graphics and accuracy. The Tournament Mode is the latest inclusion into the game where four-, eight-, or 16-teams can indulge in Pong Toss & Speed Pong. There are also six regulation tables as well as the ability to make house rules simpler. Speed Pong enables up to three challengers to play at the same time. The gamer who sinks the final cup takes all the glory of winning.

The brave outlaw who steals from the rich and gives to the poor is back and this time shoots his arrow into the WiiWare array. Published by Nordcurrent, Robin Hood: The Return of Richard is a captivating single player title. England is in ruins as foes destroy its towns and villages in the absence of King Richard. This chaotic time sees Robin Hood and a group of free archers taking refuge in the Sherwood Forest where they fight for justice. There are 12 levels as well as loads of super villains like the Sheriff of Nottingham. Bonus points can be acquired by finding hidden objects. The overall score can also be enhanced via the High Score Table.

Mario Tennis was originally fashioned for the Nintendo 64 and is packed with bright graphics and intuitive controls. Players will be treated to a cast of 16 Nintendo characters, each with their own features such as power, speed and control. The various game modes in the title include a standard tournament, Bowser Stage and multiplayer mode.

Jett Rocket and Mario Tennis are priced at 1,000 Wii Points each while Pong Toss Pro – Frat Party Games and Robin Hood: The Return of Richard can be acquired for 600 and 500 Wii Points respectively.