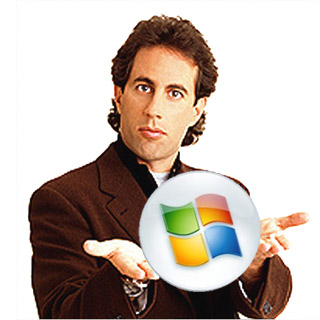 The news of Jerry Seinfeld being considered for Microsoft ad campaign has spread like fire. Why not if the comedian is going to feature with the former Microsoft chairman Bill Gates and is being paid a staggering $10 million. The ad campaign is meant for some positive marketing of the software giant.

Some reports claim that Seinfeld will do no good to the Microsoft image and his effectiveness after so many years is doubtful, some proclaim him to be the perfect weapon against the Apple’s PC vs Mac ad campaign. Also, there are reports that actors Will Ferrell and Chris Rock were also considered for the campaign.

Apparently, the slogan of the ad campaign will be “Windows not Walls”.

Seinfeld is best known for his sitcom Seinfeld that were aired a decade back and then for his American Express ads.

However, while we don’t doubt Seinfeld’s ability to grip the audience, he will need to be really snappier to counter Apple feel some. Apple hired the young blood Justin Long alongside John Hodgman for their Mac Campaign, it will be really interesting to see what Seinfeld really does. And more so since he used a Mac in his shows!