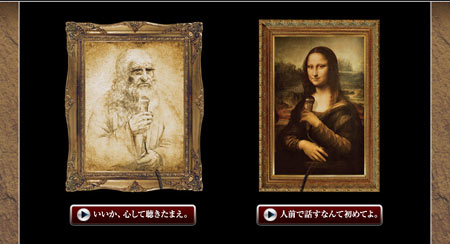 Researchers at the Japan Acoustic Lab have studied the skeletal structures of the historical figures’ faces to reproduce how their voices would have sounded. They have done this by employing methods used in criminal investigations.

The voices are part of the intense promotion of the Hollywood film on Microsoft’s Japanese site.

On the website the lab’s president Dr. Matsumi Suzuki says, “We believe we were able to create the voices that are very close to the real voices. Perhaps it was really how they really sounded.”

A former police engineer who specializes in audio analysis, Suzuki says he assumed the woman in the legendary famed Leonardo painting was 168 centimeters (5 foot, 6 inches) tall, giving her a relatively low tone for a woman.

“We cannot tell exactly how tall she was. So we analyzed the length of her right middle finger” and looked at the average height of Italian women, he said.

According to Suzuki it was Mona Lisa’s large nose that resulted in him giving her a slightly nasal pitch.

For Leonardo, Suzuki made his voice around the time when he was 60 years old to match his bearded face in the famous sketched portrait.

“Because the beard covers his jaws in his portrait, we could not tell his exact skeletal features. We assumed that he had a heavy-jowled face, giving him a nice, bass tone,” Suzuki says.

Suzuki is not new to this field. He frequently appears in popular media, has used his skills in a variety of fields, such as analyzing voices in purported recordings of Osama bin Laden.