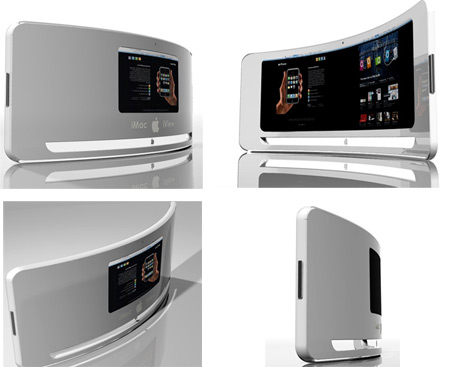 Soon the Apple iMac may get an ultra-futuristic design, if only Apple pays heed to designer Nuno Teixeira’s latest iView concept of the iMac computer.

Before we go all out explaining the design of this concept, you must know that designer Nuno Teixeira believes that every computer should be two faced and with a whole lot of curves.

Teixeira’s design for the iMac is called iView and features a giant curved screen. Now, wait a minute, doesn’t this sound very familiar. Why, yes it does, because this idea is similar to the Alienware Curved Display that was showcased at CES 2008.

But, that’s not all; the iView also sports a secondary built-in LCD on the back of the ultra-wide curved display. It also has two built-in Web cams.

Nuno Teixeira’s iView concept for the iMac would be useful to students and more importantly, graphic designers.

All you visual addicts should not get very worked up about this one. It’s only a concept after all. But, we do hope something like this makes it out of the concept and into the real world.