Is For Honor crossplay gonna let you share the thrill of intense medieval combat with your cross-platform friends? Yes, and very soon.

2017’s medieval fantasy-based game has been enthralling players for quite some time. It supports single and multiplayer modes. So we obviously have to talk about crossplay functionality, a feature that is increasingly being demanded by gamers.

The current generation of players does not want the hassle of buying consoles based on the hardware their gaming friends are using.

They prefer online multiplayer games that already support cross platform play to avoid the problem of choosing between the PC, PlayStation or Xbox series just to play with their friends.

Why Should For Honor Support Cross Platform Play? 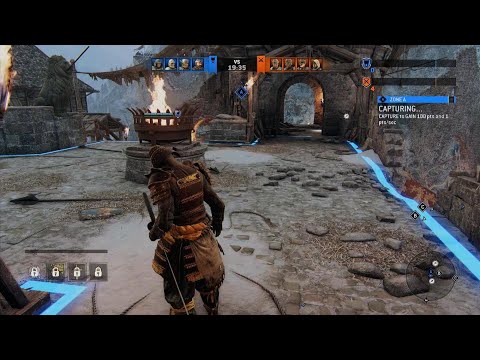 The game’s large variety of available characters, numerous multiplayer modes (which includes 4 vs. 4, 2 vs. 2, and 1 vs. 1 matchups), and stimulating battle system makes players want to team up with or battle against their friends even if they are using different platforms.

Is For Honor Crossplay Compatible In 2022?

Luckily for you, we are happy to say that For Honor rolled out a key crossplay feature in March 2022, for its PlayStation, Xbox and PC players.

Ubisoft announced that it would bring crossplay functionality in two phases (Phase 1 and Phase 2).

What Is Crossplay Phase 1 Of For Honor?

The March 17th update (launched along with the Y6S1: Golden Age season) was the first phase. It allows Xbox, PlayStation, and PC players to be added into a single matchmaking pool for PVP and PVE modes, instead of separate pools for each of the platforms.

This means that a team of PC players may now be matched against a team of PlayStation or Xbox players. Unfortunately, you still have to wait for phase 2 to able to add your friends into your group and play along with them, if they’re using other platforms.

Will Crossplay Affect The Game Experience?

This feature creates a positive impact by reducing matchmaking time. Since the combined matchmaking pool will comprise players on different consoles or devices, current player skill ratings will be reset and a few games of all players will be used for creating new skill rating.

Crossplay will encompass both PVP and PVE game modes. However, the following will not feature crossplay:

Will In-Game Voice Chat Be Available To Players Across Different Platforms?

Unfortunately, due to the technical challenges of For Honor’s crossplay feature, the in-game voice chat will currently be disabled when you are playing crossplay.

But the developers have assured players that they will reintroduce voice chat at a later date.

Can Crossplay Be Disabled In For Honor?

If you do not want to access this cross-platform feature, then you can manually disable this since it was automatically updated during the March 17th launch.

All you have to do is uncheck “Crossplay” which is under the new “Online” option in the Settings Menu.

Why Did Cross Platform Support Take So Long To Arrive?

Ubisoft stated that they have always intended to support cross-platform play in For Honor. However, they had to deal with many technical challenges since the core game components were not designed with crossplay in mind.

Since a key component of crossplay has been successfully launched, we can now enjoy this feature and look forward to the implementation of the full crossplay functionality in phase 2, including group play with cross-platform friends.

What Is Phase 2 Cross Platform Multiplayer?

Ubisoft has said that phase 2 is under development and aims to roll it out by the end of 2022. As per the official statement, phase 2 will have the group play feature that will support cross-platform play.

However, they have not yet confirmed whether For Honor will have cross-progression or cross save functionality.

This may not go down well with some of its ardent fans who have been playing the game for a long time and would like the option of switching between different consoles.

What Makes The Game So Interesting?

This third-person perspective, hack and slash game engages its users by offering them a plethora of heroes (31 heroes till date) who come from different eras, including knights, samurai, Vikings, and pirates, and allow them to test their skills in up to seven multiplayer modes.

More interestingly, the For Honor developers, Ubisoft Montreal, have used a slightly different tactical battle system known as “Art of Battle,” which makes it more challenging (as well as rewarding for skill-oriented players), than the button mashing that is usually involved in hack and slash games.

In summary, if you’re a loyal gamer who’s been patiently awaiting the For Honor crossplay functionality, your wait has been rewarded with a key crossplay feature that provides a unified matchmaking pool for players across multiple platforms.

The game developers are in the process of implementing the group play feature (and hopefully the other cross-platform functionalities as well) in phase 2 so that you can team up and play with your cross-platform friends soon.