Is 7 Days To Die cross platform compatibility on your mind? We knew it would be because this zombie survival horror video game is unquestionably more fun with friends.

7 Days To Die is a survival crafting game released back in 2013 by The Fun Pimps. Even after 9 years, it’s still in Early Access on Steam. This naturally means it’ll constantly be updated by the game studio.

The game is available on PC, PlayStation and Xbox. It revolves around zombies infesting a post-apocalyptic world and puts you in the middle of it.

You will need to scavenge for resources to survive. It’s fairly an open world developed game that is guaranteed to be more engaging with friends. Think Minecraft. Think Subnautica.

Unfortunately, 7 Days To Die has very limited cross-platform features. Though multiplayer is available, if your friends play on different gaming platforms, you may not be able to play with them, depending on the rig in question.

This is likely due to the game being in Early Access. The last update was released on August 2022 and the game is still considered to be in the Alpha stage.

Is 7 Days To Die cross-platform between:

Xbox One and PC

No. If you’re using a PC, you cannot play 7 Days To Die with gamers who play on Xbox One.

Xbox One and PS4/PS5

Unfortunately, players on completely different consoles cannot play with each other. If you’re using a PS4/PS5, you can only connect to the game with individuals owning a PSN ID. The same goes for Xbox One players.

You can play on a PS4 and have your friends using a PS5 connect to your game. So yeah, cross-gen is possible.

Here’s where we get to the bright side. Cross play support is available for this game in this case.

This means that people who own the game on Windows, Mac OS or Linux can play with each other. If your friend plays on a computer, you should be able to play with them irrespective of their OS.

Is the game cross-gen?

Yes, you can play the game between previous generation and current generation systems.

Is the game cross save capable?

Since the game doesn’t support cross platform play, it obviously doesn’t save game progression between multiple platforms either.

Is the game cross-progression compatible?

No, it isn’t. Cross-save and cross-progression mean the same thing, just in case you’re confused.

Will 7 Days To Die become cross-platform in the future?

No announcement about the same has been made by the game studio. So it might not get a cross-platform feature soon. This is again understandable since the game is in Early Access.

Different platforms work on different hardware and architecture. This makes it hard for the developers who are still updating the game to introduce crossplay.

Once it’s off the Early Access shelf, then fans can probably expect the developers to start working on cross-platform functionality.

Bear in mind that it would ultimately be expensive to have it cross-platform compatible and implement seamless versions between different devices unless it garnered a fan base large enough to justify the cost.

What does the term “sandbox” mean?

Sandbox games let players indulge in their creativity. Such games often do not have any pre-determined goal or objective.

The players are the ones who decide what the end goal of the game looks like. A majority of the survival-craft genre are inherently sandbox.

Your curiosity and resource-gathering skills determine how easily you’ll get to your goal. 7 Days To Die is no different in that aspect.

What platforms and operating systems is 7 Days To Die available on?

It’s available on most common platforms that people play games on. Windows, Linux, MacOS X, PS4/PS5 and Xbox One.

Is this a good game for a beginner?

That depends on a lot of factors. But generally, even if you haven’t played a single survival crafting video game, you will still have a good time in 7 Days To Die.

You can tweak the game settings before you create a new world. There are multiple difficulty options that you can alter to give you a suitable experience.

Veteran players can set it  to be as challenging as possible, while beginners are able to make the game easier. 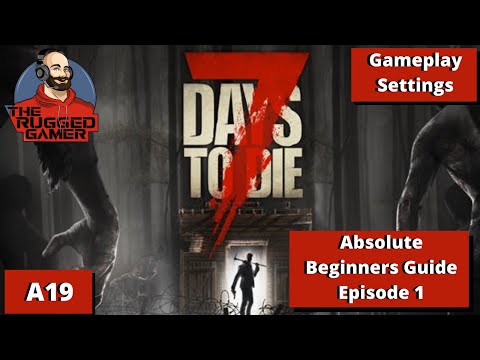 If you’re confused about the settings you should choose, you can find YouTube videos that break down the game difficulty options in 7 Days To Die.

Is 7 Days To Die similar to Fallout 4?

They are comparable in some ways. Both have survival-craft elements and a similar gameplay loop — gather resources, and build tools and utilities that can enhance your survival capabilities.

But they differ in many other aspects as well.

Fallout 4 is an action-RPG game that represents the quintessential Bethesda game design. It has a massive number of side quests.

Some of them are very well written and are tied to the lore of the game’s universe. It has an over-arching main questline that is pretty well-made and immersive.

It has NPCs who give out quests and lore pieces as well as an RPG-style vendor system. The game has companions that you can take along with you on your journey.

It is the complete AAA RPG experience with a side of bugs that you can get a patch for not from Bethesda, but from a mod made by the Fallout community.

7 Days To Die has almost none of the above-mentioned features except for a decent vendor system. But it doesn’t need to have those traits. It’s not advertised as an RPG.

The game excels at what it promises to deliver in the first place. The survival crafting system is vibrant and has more freedom to it than FO4.

The FO4 crafting mechanics is just an extra bonus that comes with the main RPG narrative focused gameplay that we all have come to know and love from Bethesda. One glaring difference is that Fallout 4 is a single player experience, while 7 Days To Die can be played solo or with friends.

As to which game is better, like most things in life, the answer is subjective and depends on the person you ask.

What are the minimum system requirements to make 7 Days To Die work properly?

Notes: Running a dedicated server and client on the same computer will double RAM requirements. Future versions of the release may ask for increased storage space.

What are other survival horror games?

7 Days To Die is a great game to play with friends. It’s still a very fun experience if you’re a solo player.

It has no cross platform feature, which makes it impossible for people who use different devices to play with each other. Since it’s still in the paid alpha stage, it’s likely that the feature will be unavailable for a while (or not at all).

Nine years in Early Access is definitely not normal for games, especially for a title like 7 Days To Die since it enjoys a fairly large fan-base even after a decade.

On the bright side, the system requirements for this game are not as intensive as most other titles in the genre.

Is For Honor Crossplay / Cross-Platform? [UPDATE]