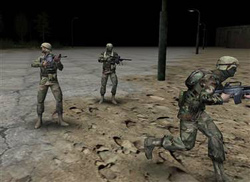 Iranian school children have created a computer game which has an Iranian Special Forces hero rescuing one of the country’s top atomic scientists captured by US forces in Iraq.

The game called “Commander Bahman” which has been developed by schoolchildren belonging to the Union of Islamic Student Societies will be on stands in 2007. The story is based around an Iranian atomic scientist “Doctor Saeed Kousha,” a 30-year-old Iranian engineer who goes on a pilgrimage to the Shi’ite Muslim holy city of Kerbala in Iraq where he is kidnapped by US troops and has to be rescued by Commander Bahman, who is a friend of Kusha’s father, who was martyred in the 1980-1988 Iran-Iraq war.

“Commander Bahman” has eight levels and will be soon be on the market, the Fars News Agency said. It did not say what the game would be called.

The big idea is to counter a game called “Assault on Iran” made by Kuma Reality Games where American Special Forces have to destroy Iran’s nuclear research capability.

In real life, Iran’s nuclear activities are under scrutiny by the U.N. Security Council for failing to convince the United States and some of Washington’s Western allies that its research is not part of a quest to create atomic weapons. Tehran insists its work is peaceful.