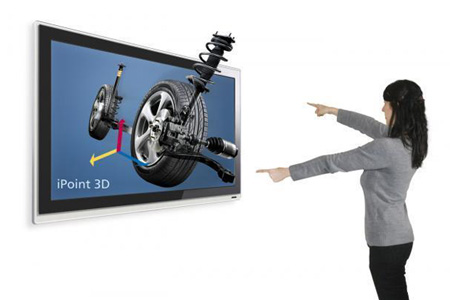 Techno-freaks can now welcome a new device that appears to have come straight out of some sci-fi movie. Boffins at the Fraunhofer Institute for Telecommunications, Heinrich-Hertz-Institut are gearing up to reveal a new 3-D display called iPoint 3D in the coming days. The display is quite unlike ordinary displays as it is controlled by the use of simple gestures of the hand.

Users can actually look forward to using their fingers as a remote control for the iPoint 3D. While the display comes minus any 3-D glasses or a data glove, there is also no need of touching the TV panel as it operates. The highlight of the 3D display is its quick response to gestures. The system will respond instantly on identifying a user’s hand movements.

Paul Chojecki, a research scientist at the HHI, explaining the technology, mentioned, “The heart of iPoint 3D is a recognition device, not much larger than a keyboard, that can be suspended from the ceiling above the user or integrated in a coffee table. Its two built-in cameras detect hands and fingers in real time and transmit the information to a computer.”

Chojecki further explained, “Since the interaction is entirely contact less, the system is ideal for scenarios where contact between the user and the system is not possible or not allowed, such as in an operating room.”

To get the system going, users simply need to move their hands in front of the screens. The display is bundled with a distinct recognition device that adorns a size slightly larger a regular keyboard. The recognition device packs in two built-in FireWire cameras that monitor a user’s hands.

The cameras are inexpensive and easy to install. The novel display will certainly appeal gamers. Besides, it should also find practical application in a user’s living room along with being used in offices, hospitals or simply as an integral part of an interactive information system.

While the HHI innovation has first been incorporated to control a display, the future may also see other applications and devices being controlled by the technology. Yes the finger could just be the next remote control!

The iPoint 3D display is expected to be showcased at the CeBIT from March 3-8, 2009. There is no word yet on the price or availability of the display.