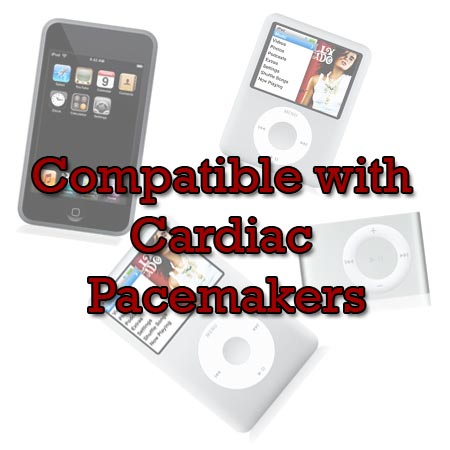 Contradicting previous studies, a new research held by FDA researcher Howard Bassen and colleagues says that iPod does not interfere in the functions of cardiac pacemakers.

Previous studies concluded with the result that low-level magnetic fields and resulting induced voltages produced by the iPod interfere with the pacemakers’ function. Due to which patients may suffer from dizziness while listening to the iPod. Also it was believed that iPods having internal hard drives produce the highest amount of emission.

However the new research indicates that iPods are very safe for heart patients with pacemaker implants. Bassen’s study which was published in journal BioMedical Engineering says that iPods are perfectly compatible with the pacemakers and safe for patients to use.

“We measured magnetic field emissions with a 3-coil sensor placed within 1 cm (half an inch) of the surface of the player. Highly localized fields were observed (only existing in a one square cm area),” wrote researchers in their report published in the BioMedical Engineering OnLine journal.

Taking the new study in consideration cardiac patients can fearlessly enjoy music and videos on their iPods now.